Response: After Soldier of Gondor enters play, seach the top 5 cards of your deck for a Gondor ally and add it to your hand (any number of Gondor allies instead if your threat is 40 or higher). Shuffle your deck. 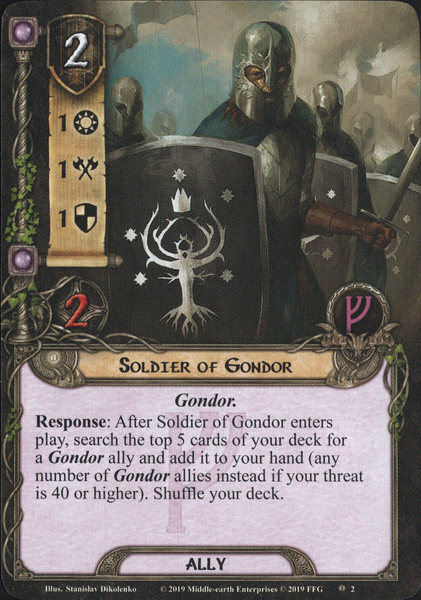 I have not played Gondor decks very often, but once I did, I found this ally very useful. He is the generic Gondorian Soldier that was missing for a very long time. Takes advantage of all the usual Gondor boosts from Boromir and Visionary Leadership as well as For Gondor!, and since Gondor wants to swarm allies as quick as possible, his fetching ability is great, too, and even more precise than including card draw. He even has some kind of Valour support, a direction to which the Gondor decks got pushed a bit in the last cycle. Overall a great ally for his cost, and he really elevates the archetype in my opinion.