Response: After Sarn Ford Sentry enters play, draw 1 card for each enemy engaged with you.

"Lonely men are we, Rangers of the wild, hunters but hunters ever of the servants of the Enemy..." Aragorn, The Fellowship of the Ring
Smirtouille 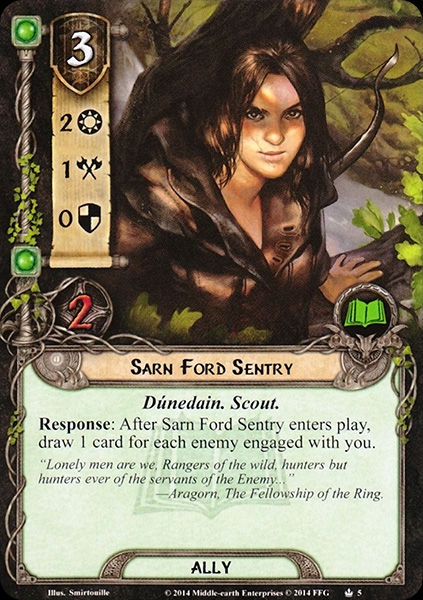 How good is the Sarn Ford Senty? On the surface she appears to be pretty meh. Three resources for two willpower is average for Lore, and her ability is conditional, adding more question marks. In fact, like many Dunedain allies, this card doesn't have much to offer outside of its specific archtype, since it's unlikely that you will be engaged with more then one enemy during the planning phase. A single non-repeatable one card draw is nothing to write home about. However, when this card is considered in light of the type of deck it was designed for, its real value shows through.

To begin with, the two things that make the Dunedain arguably the most difficult archtype to play, at least in solo, are its lack of willpower and card draw. Lets look at willpower first. There are only four other non-unique Dunedain allies with two plus willpower. The Greyflood Wanderer has the same cost to stat ratio, but has a very negligible ability that requires doomed for it to trigger. Dunedain Wanderer is a pure secrecy card, and Dunedain Pathfinder requires a location to be put into play. None of these have any synergy at all with the later Dunedain archtype, and only one has an even semi-useful ability. There is even an argument that the Pathfinder does more harm than good. The fourth card, Ranger of Cordalon, is the only one that comes close. However, its ability focuses on combat rather then questing, which is an area the Dunedain are already very strong in. Contrast this to Sarn Ford Sentry whose ability is what makes it stand out. This card is the only source of built in card draw that the Dunedain have. Lets take a look at a quick example. Dunedain want to be engaged with an ideal two enemies. With Heir of Valandil, the cost of the Sentry can be reduced, and you will draw two cards. That's one Lore resource for a two willpower ally and two cards. Not only is that not bad, its actually pretty dang good. There's not many cards that bring that kind of value to the table.

In short, this card is the reason it's worthwhile to run Dunedain in Lore. It gives an essential boost to Dunedain questing power, and fuels a rare Dunedain card draw engine. I would even go so far as to say that this is the best Dunedain ally outside of Guardian of Arnor.