You may give Herald of Anórien doomed 2 when you play it from your hand. If you do, it gains: "Response: After you play Herald of Anórien, choose a player. That player may put into play 1 ally from his hand with a printed cost 2 or lower."

"Send the heralds forth! Let them summon all who dwell nigh!" Théoden, The Two Towers
Adam Lane 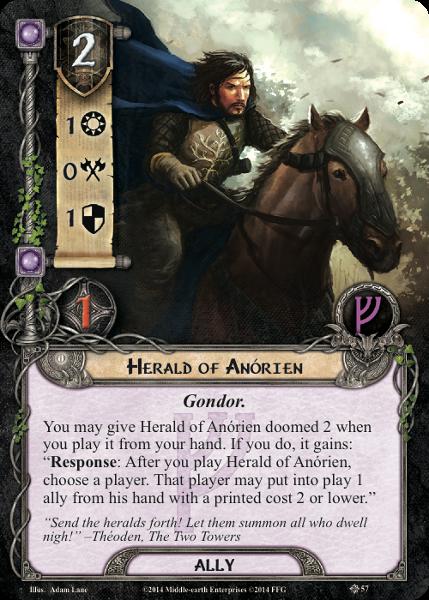 A favourite of mine, and one of the best executions of the optional Doomed card. One of the best uses for Doomed cards is to accelerate your early game when resources are scarce but threat is plentiful, and this does exactly that. By paying 2 resources for this ally and then triggering Doomed 2 you, or another player of your choice, can bring in another ally of cost 2 or less. Of course one could take the view that in this circumstance you've effectively just paid the 2 resources for the other ally and then gotten an extra 1 or chump out of the deal; but on the other hand, for one there are benefits to having extra bodies on the table such as the further early game acceleration of A Very Good Tale or perhaps global boosts like Visionary Leadership, Sword that was Broken or Faramir, and for another even without such benefits this still allows for some significant resource-smoothing between spheres and indeed players.

To give examples, allowing a or player to bring in, for example, Arwen Undómiel or an Honour Guard while still retaining a resource for A Test of Will or Feint could be a very valuable early game play well worth your 2 resources and a bit of threat. An early Warden of Healing could also be significant in a damage-heavy quest. Of note is of course the fact that the player with each of these allies might have only one hero of the relevant sphere and thus be slower to afford the ally under normal circumstances. A further option with this is any ally with a useful enters play effect - such as Envoy of Pelargir or Soldier of Dol Amroth each of whom effectively reimburse a resource, any of the variety of 2-cost Silvan allies, and so on.

But even leaving aside the (significant) co-operative benefits and the potential for resource-smoothing, at its core the natural purpose of this ally and his optional Doomed effect is simply to accelerate an ally swarm. Given that swarming allies to overwhelm the encounter deck by force of numbers is an incredibly effective course to victory in a wide variety of quests, and that the early game is the most difficult part of the game for the most part, the opportunity to immediately bring in two allies for the price (in resources) of one can be a massive boost and set you well on the path to that eventual victory. Whichever purpose you put him to, the Herald of Anórien is just an incredibly useful ally to have.

Warden of Arnor 5145
As a single player, I find the Herald to be very useful for splashing in a few allies that you don’t have a resource match. — Nystrum 28 7/2/21
Warden of Healing is often the best card to cheat in, as Leadership's healing is terrible — NERD 522 11/1/22