Combat Action: If you have not engaged an enemy this round, exhaust Haldir of Lórien to declare him as an attacker (and resolve his attack) against an enemy not engaged with you. Limit once per round.

"We allow no strangers to spy out the secrets of the Naith..." The Fellowship of the Ring
Sebastian Giacobino 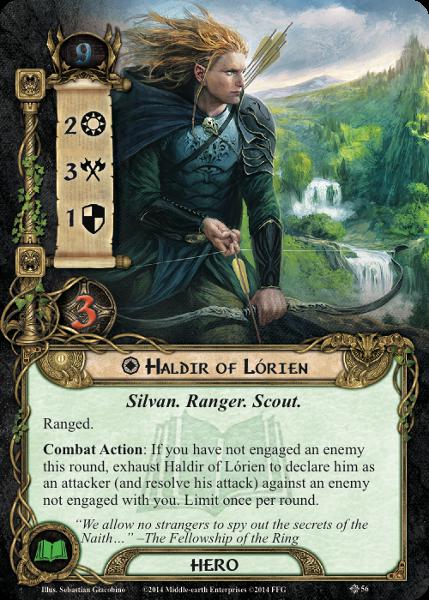 I identified Haldir as one of the best cards from the Ring-maker cycle for supporting a developing archetype, that being the dedicated long-range combat deck. In this case actually it might be more accurate to say he created the archetype all by himself. Obviously it was always possible to build a combat deck stuffed with Ranged (and Sentinel) characters which could therefore handle combat everywhere on the table in multiplayer without really being concerned about who engages what - but the release of Haldir really pushed people towards the idea of a combat deck which specifically tries not to ever engage any enemies itself. The only cards which supported that kind of approach beforehand were Brand son of Bain and Bard the Bowman, both of whom are great heroes, but neither of them caught the players' imagination in quite the same way, though either of them might work reasonably well with Haldir for that reason.

Let's break down this card. 9 threat cost is reasonably low and Haldir is the first and so far only 3 Ranged hero in the sphere, which obviously is not generally as strong on attack as . As much as it sometimes frustrates me, the best weapons in the game are only for Elves, so the fact Haldir is Silvan gives him an advantage since he can use the Rivendell Blade and Bow of the Galadhrim - though if you enable his ability y keeping your threat down Dagger of Westernesse could also work. Speaking of Silvan, 3 Ranged and the sphere, one of the obvious comparisons is the Core version of Legolas, and personally I think Haldir compares favourably. As much as people extol the virtues of Legolas' very focused statline, exchanging 1 hit point for a second point of which you can use with a readying effect like Unexpected Courage, Light of Valinor or of course the in-sphere Wingfoot is a decent trade. As with Legolas though, the non- stats are mostly irrelevant - what matters is 3 Ranged and the ability.

And what an ability. Limitations, it's a combat action so you can't use it in other phases for potential shenanigans, and more significantly, it only works if you haven't engaged an enemy this round. But assuming you haven't engaged an enemy, Haldir can make an attack against any enemy not engaged with you. The primary use of this is that since it can be done in any action window in the combat phase you can use this ability to declare an attack before resolving enemy attacks, thus hopefully killing something and preventing its attack altogether. However a secondary and similarly potent option is to attack an enemy in the staging area - likewise preventing any attack it might make in the future if you kill it, and avoiding any possibly problematic consequences for engaging it. I don't actually play Haldir that often, but when I do I'm pretty much always struck by just how amazing that ability to pre-emptively kill enemies is.

Obviously to get best use out of Haldir you need to increase his to the point where he can kill enemies in one hit by himself using his ability - I mentioned the three most obvious options for getting that boost above, all in the sphere, but if you want to look elsewhere, Dúnedain Mark in , Ranger Spear in and Mirkwood Long-knife in are decent options. If you can't get enough for an instant kill, some means of throwing additional damage around can obviously make the difference - so cards like Thalin, Anborn, Argalad, Gondorian Spearman or Spear of the Citadel could work well, to pick a few examples. A potentially more involved but fun possibility is Infighting - you can use damage from another enemy to finish off the pre-emptive kill on the one Haldir attacks, or use Haldir's damage to kill a different enemy (potentially making things easier depending on the different values of the enemies); for maximum shenanigans on rounds with no new enemies you can have Haldir attack enemies caught by Forest Snares or Ranger Spikes to effectively bank damage that you can use to kill other enemies with Infighting later. Getting enough boosts for Haldir to just make one-shot kills is undoubtedly more efficient, but the point is you have options.

The one remaining aspect of this is the feasibility of avoiding engaging enemies to ensure Haldir's ability remains available every round. Sometimes in some quests you'll just get screwed over because there'll be a treachery or other encounter card effect which puts an enemy into play engaged with you, and besides cancelling the effect there's nothing you can do about that. In other cases you definitely have options though. You can obviously try to keep your threat down, though the sphere has almost no threat reduction in it so you're likely looking elsewhere. can mess with engagement costs with effects like Noiseless Movement, Take No Notice and of course Advance Warning. In general though, you are somewhat dependent on the other players in the game (who shouldn't mind taking an enemy for you if you can kill it before it attacks, of course). The problem arises if you have more enemies than players in the game and are past their engagement costs, because then you only have so many optional engagements and thus player order may force you to engage something. You can try to avoid having that many enemies in play at a time with effects like Gildor's Counsel and Quick Ears, but mostly you hope the other players have means of helping you out, of which there are a few. Halbarad can work nicely in a deck opposite Haldir, as can effects like Westfold Outrider, The Hammer-stroke, Aragorn (requiring something like Quick Strike to get the extra enemy before engagement checks), or perhaps just using Follow Me! to change the player order at a relevant moment could make the difference. Even with these, sometimes it may not work out, but it'll work a lot of the time.

Haldir was a sizeable shake-up to the meta of this game, pretty much creating his own deck archetype immediately on his release and instantly rocketing up the hero rankings as one of the best attacking heroes in the game (which he still is), that unique ability to alter the timing structure of the combat phase (not to mention attack into the staging area) really setting him apart as something truly special.

Haldir is one of my favourite heroes in the game. He is an archetype all unto his own, that of sniping out enemies in the staging area. And the best defence is truly a good offence in this hero’s case. Who cares about shadow effects let alone defending at all when you never have to engage enemies and can quietly pick them off in the staging area. Though a quick weakness of this archetype needs to be discussed, that that of enemies that either have incredibly low threat or are put directly into engagement with you. In either case Gaffer Gamgee is Haldir’s best friend to stall that Nazgul that decided to come knocking on your front door. And the also in sphere ally Mablung helps to reset your enemy back to the staging area where you can once again use him as target practice.

Warden really hit it home with his review so I will try not to echo his points too much and instead focus on him in a completed card pool.

With the addition of The Grey Wanderer, The One Ring, Strength and Courage, and Strider; Haldir can begin round one of every single game starting with a willpower of 4, not exhausting to quest, an attack of 7 and a mere starting threat of 9. You will spend most quests just quietly sneaking through Middle Earth and putting arrows into the forces of evil. With Golden Belt and some Elven weapons he can increase that attack to 11 fairly easily, and that can comfortably take out all but the strongest of boss enemies in the game.

In fact Haldir is the perfect answer to the insane challenge mode that Caleb Grace announced of playing every quest with the Day/Night mechanic.

If you haven’t given this ranger sniper a go, I highly recommend it and you won’t be disappointed.

For a fun build sample check out: