"Come! I will lead you now!"
Aragorn, The Fellowship of the Ring
Ilich Henriquez 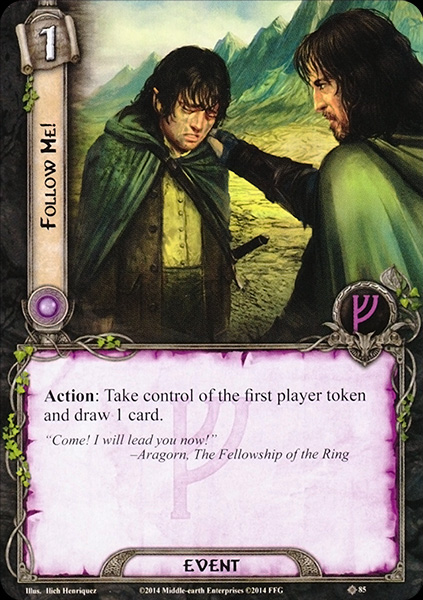 This is a card which I've always had issues with. It certainly seems to have some potential valid uses, but they've never really seemed good enough to justify including it in decks. On the one hand obviously it's 1 resource for 1 card, which in the sphere with Steward of Gondor is manageable, but there are other ways of getting that - Hidden Cache does it, Campfire Tales also draws for other players, We Are Not Idle doesn't cost anything, if you can play it then Unlikely Friendship even gives you a resource back. So if there is value to this card it has to come from the other half of the effect, which is taking control of the first player token.

There's certainly more potential in that. The question is whether it's worth a slot in your deck. So let's look at potential uses of spontaneously becoming the first player during any action window:

Obviously there's the potential for combining multiple of these ideas - building a deck around Elf-stones against a quest with a boss enemy which always targets the first player, for example - but it's still problematic and there are so many easier ways to achieve your end. I think I hit on my biggest problem though in the first bullet point - drawing more cards is usually something you want to do as fast as possible to give yourself more options, but all these potential uses for becoming the first player seem to be things which you have to time carefully when you do them, so the two aspects of the card work against each other. As useful as card draw is, this card might work better if the second half of the effect was something else which allowed you to pick your moment without feeling like you were mmissing out on something. Maybe then it could be brought down to cost 0 as well, that'd be nice, but obviously kind of too good with it drawing a card. As it is though, it's just really hard to justify using this card.