Response: After Brand son of Bain attacks and defeats an enemy engaged with another player, choose and ready one of that player's characters.

"The grandson of Bard the Bowman rules them, Brand son of Bain son of Bard."
Glóin, The Fellowship of the Ring
Tiziano Baracchi 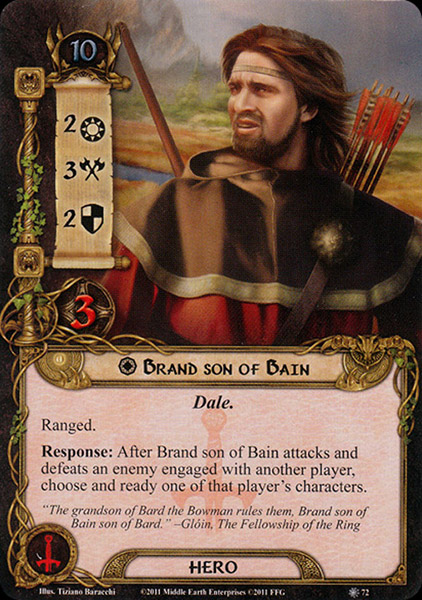 One of my favourite early heroes, and a sorely under-rated one. The reason I like him is simple - I like it when decks work co-operatively together, and I like readying effects. The reason he's good is that those two things I just mentioned can be incredibly powerful.

Now there are ways to make Brand insanely powerful, namely by combining him with Merry on the other side of the table. They attack and kill something engaged with the Merry player, Merry readies Brand, Brand readies Merry, and they do it again. But even outside of this niche ridiculous case, the extra action you gain from Brand can often be key to finishing off one more enemy than you otherwise could, which I would consider more valuable in terms of establishing a foothold against the encounter deck than the 2 progress you'd get from Legolas (Brand's primary competition for the 3 Ranged slot). Of course this is not universal, sometimes you can kill everything anyway, but then, if the enemies are well under control, you can use Brand to ready characters like Denethor or Henamarth Riversong for scrying; Beravor for card draw; Argalad to throw a point of direct damage into the staging area; Warden of Healing for... well, for healing; Elrond for Vilya. There's a lot of value that can potentially be gained by getting an additional action even right at the end of the combat phase. Alternatively, if you use Quick Strike and Brand can get the kill on his own then you can get that action earlier, if perhaps you need another defender in a hurry. Returning to my earlier parenthesised comparison, I should make it clear that I definitely agree Legolas is good. The ability is powerful and he's low threat. But I do think he's a bit over-rated, and the case can definitely be made for using Brand instead in some contexts (especially because ally Legolas is a brilliant option for decks now).

The biggest knock against Brand is that unfortunately pretty much all of the best weapons are specific to elves. It wouldn't be unreasonable to make Brand an Elf-friend specifically in order to kit him out with Rivendell Bow and Bows of the Galadhrim since they fit perfectly with his ability and he's much more likely to get that kill if he has 8 . Without such shenanigans however, there's always Dagger of Westernesse (since you want enemies to engage other players, you may be deliberately keeping your threat down and therefore get the full +2) and the old faithful Dúnedain Mark, which handily is also not restricted, allowing you to either stack more boosts or get more potential readies out of Brand by giving him a Rohan Warhorse or two.

Building around Brand can potentially be a lot like building around Haldir of Lórien - you want enemies to engage everyone else rather than you so his ability will be useful. So keeping your threat down is obviously good, perhaps playing with engagement costs via effects such as Pippin, Take No Notice, Noiseless Movement, etc, other decks with engagement effects like Westfold Outrider, Tireless Hunters, The Hammer-stroke, etc, and perhaps also including more Ranged and Sentinel characters in your deck to just handle combat in general from the other side of the table. Brand is probably going to be at his best in a context where multiple players build co-operatively to have the engagements fall out the way you want and to ensure he has good targets for readying, but even without that he can still be well worth it if you build it right just on basic assumptions about other players' decks.

The art is weird and he inexplicably lacks the Noble trait despite being a King, but Brand Son of Bain (Son of Bard) is nevertheless a strong hero in the right deck and not to be underestimated.

This is by far the best Hero in the entire game. Just look at his face. That's the face of a guy right about to shoot an arrow from Dale to all the way to Mordor and Sauron's giant eyeball. I know that he gets made fun a lot but if you can build a right deck for them, he can be absolutely insane in multiplayer, Legolas wishes he could be as good as an archer as Brand.