"I name you Elf-friend; and may the stars shine upon the end of your road!"
Gildor, The Fellowship of the Ring
Sebastian Giacobino

The Treachery of Rhudaur #93. Neutral. 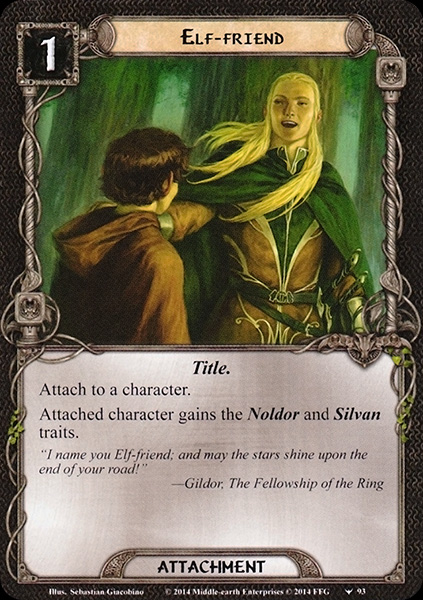 Extended Quote: “Courage is found in unlikely places,” said Gildor. “Be of good hope! Sleep now! In the morning we shall have gone; but we will send our messages through the lands. The Wandering Companies shall know of your journey, and those that have power for good shall be on the watch. I name you Elf-friend; and may the stars shine upon the end of your road! Seldom have we had such delight in strangers, and it is fair to hear words of the Ancient Speech from the lips of other wanderers in the world.”

I recently concluded acquiring the Angmar Awakened cycle and turned to RingsDB for some inspiration on how to use a few of the new-to-me Noldor based cards (Lords of the Eldar, Tale of Tinúviel, etc) but Elf-friend particularly intrigued me. I wanted to see how the community included these things in their decks.

To date there are 170 decks using Elf-friend that have a deck description, since I wanted to be able to see if there was any provided insight to its usage (turns out there are 229 total decks, but I already did my analysis and it probably wouldn’t change anything much based on sample size). I read the deck descriptions for the 30 top rated decks, the rest may have been interesting, but it took long enough as it is (ibid the sample size argument); I used the 170 decks to simply see what frequency other cards appeared with Elf-friend. I certainly acknowledge more recently released cards won’t factor into this analysis as much as cards people have had a much longer time to experiment with.

2) Silvan Tracker 62/170, 36.5% -- Often this is combined with Treebeard (more in a moment) or anytime you wanted alternate or extra healing (Note: Elf-Friend is not unique, so it can be played on multiple characters). This look like the main application for allies (probably some minor use for the weapons, but nothing you'd build around).

3) Light of Valinor 62/170, 36.5% -- Because why not? We all know it’s pretty OP, and I just listened to an old COTR podcast where there was a spirited contest where they briefly debated whether readying was the most important effect in the game (BOLD but TRUE!)

6) O Lórien! 25/170, 14.7% -- This one seems more connected to a variety of Silvan related decks. It doesn’t require Elf-friend to be played and is more a biproduct of them appearing in decks together (see Prince Imrahil)

11) There were a few others below 10 occurrences: Star Brooch, The Elvenking, etc

Enabling Elf based events (most of which require a Silvan/Noldor unique character in play):

3) The rest are all below 10 occurrences (Unlikely Friendship 9, Revealed in Wrath 8, Lords of the Eldar 7, Heirs of Earendil 3, so I’m not finding anything too inspiring here.

Arwen Undómiel appears in 50% of top decks (15/30 but only 51/170). This enables her ability to target the wearer of the title, hopefully kickstarting your game or passing resources anytime they’re needed off-sphere. Consider it an alternate form of Errand-rider with any other benefits you work in.

Treebeard 20% of top decks (6/30 but only 21/170) Combining with Silvan Tracker (and Lembas), allows for max usage of his ability (or anywhere you want to get tons of healing, i.e Glóin)

Prince Imrahil 13% of top decks (4/30 but only 18/170) (including Seastan's best in group: Imrahilvan) All sorts of Silvan based bouncing shenanigans.

These three heroes appear much more in the top 30 decks, but I didn’t bother going through all the heroes; this is just based on interesting deck description reads. There are other heroes that appear frequently with Elf-friend, but they’re indirectly tied to it (i.e Celeborn). I think a yet unexplored target could be Lothíriel, but since my collection is way behind aquiring her, I'll have to leave it up to others to experiment.

** Oh, the irony and strife of needing to use it on a Noldor to enable Silvan weapons! We should just slap it on Gildor Inglorion for that matter since the quote came from his mouth (Glorfindel is the intriguing target since he’d make decent use of Mirkwood Long-knife)

** Props for clever resource acceleration via Beregond, Long Lake Trader, and Bartering (via Durins_Father's Direct Dale Damage Doing Duty). I wouldn't say Elf-friend is required, but it uses the same trick to allow the Elven based attachments.

There’s more I could say, but you’re probably already wondering why I’ve wasted so much time reviewing a several year old card that appears in so few described decks (170/8933, 1.9%). Yes, I’m wondering that too at this point. Let me know if there are any other cool uses for it (but based on the frequency, I can already tell it’s one not too many are toying around with).