If Éomer is in play, Lothíriel gains the Rohan trait.

Response: After Lothíriel commits to a quest, choose an ally in your hand. If that ally shares a Trait with her, put that ally into play exhausted and committed to the quest. At the end of the phase, if that ally is still in play, shuffle it into your deck. 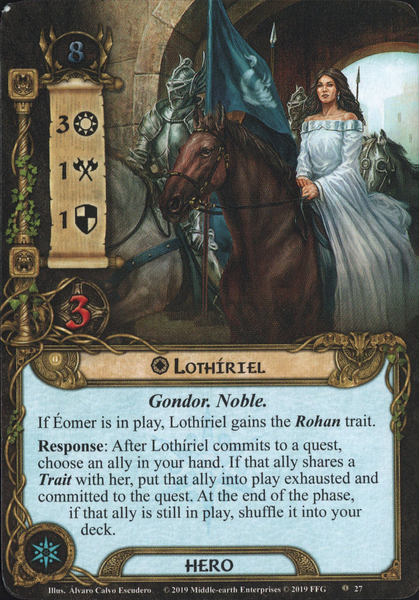 This game keeps surprising me with hidden subtleties. I like this card for its combination of mechanisms and flavour. It has an obvious pairing (hah) with Éomer, which seems fitting as he and Lothíriel got married. But there is an equally flavourful yet more subtle pairing between this card and both incarnations of her father, Prince Imrahil.

Prince Imrahil benefits directly from the synergy between his ability and his daughter's, him being able to ready as soon as the ally brought into play by his daughter leaves again. Then there's his incarnation, Prince Imrahil. His ability echoes that of his daughter, though only by playing an ally from the top 5 cards of your deck instead of your hand. In both instances, father and daughter share a connection. I think I know what kind of deck I'll make for my daughter when she's a bit older.