Response: After Frodo Baggins commits to the quest, spend 1 resource from his resource pool to ready another unique character committed to the quest. If you quest successfully this phase, reduce your threat by 1.

"Keep your tempers and hold your hands to the last possible moment!"
-The Return of the King
Sara Biddle

A Shadow in the East #2. Leadership. 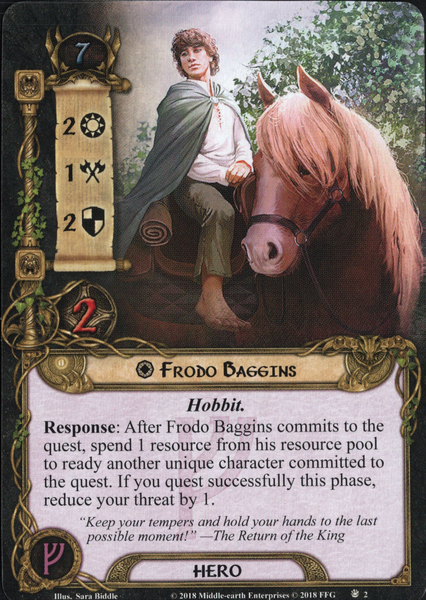 Frodo seems like an extremely powerful and versatile hero. Low threat, decent stats that compliment his ability well (except maybe his which you likely won't be using much) and access to two of the game's most useful abilities: action advantage and threat reduction. In many ways he's comparable to Aragorn (an old classic and one of my favorite heroes), yet arguably better. Suddenly heroes with bloated statlines that have trouble taking full advantage of them (like Glorfindel for instance) can now perform to their full potential from the start of the game and without dedicating deckspace to action advantage cards that you or may not draw. Also the fact that his ability isn't limited to heroes means you can even target allies like Gandalf and Elrond, which can make him act like a pseudo Galadriel. With this ability alone Frodo would already be a very good hero, but the threat reduction is icing on the cake. Seeing as you will more likely than not be questing successfully each round, especially with Frodo's ability to supply action advantage, this essentially means your threat will stay static—barring Doomed cards and other encounter cards that raise threat, of course. This has so many applications, from the obvious Hobbit decks to secrecy decks, you name it. Plus being in Leadership means he shouldn't have much difficulty paying for that one resource each round. All in all I think Frodo has so much to offer to just about any type of deck.

ThimYorke 34
Giving access to repeatable threat reduction outside spirit is a big bonus (and probably the only card capable of it ?). — Emmental 360 1/20/21
does his threat reduction ability trigger only if you spend a resource and ready another character? or does it trigger whenever you quest successfully? Im just confused on whether these to are separate abilities or not — BlackArrow 265 6/4/22
They are part of the single response, so they're not separate. After you spend the resource, the ready happens straight away. Then if you quest successfully, you get to lower your threat. If you don't spend the resource, you don't get to lower your threat. — Mythik 141 6/5/22