Action: Pay 1 resource from Glorfindel's pool to heal 1 damage on any character. (Limit once per round.)

"You saw him for a moment as he is upon the other side: one of the mighty of the firstborn."
Gandalf, The Fellowship of the Ring
Katherine Dinger 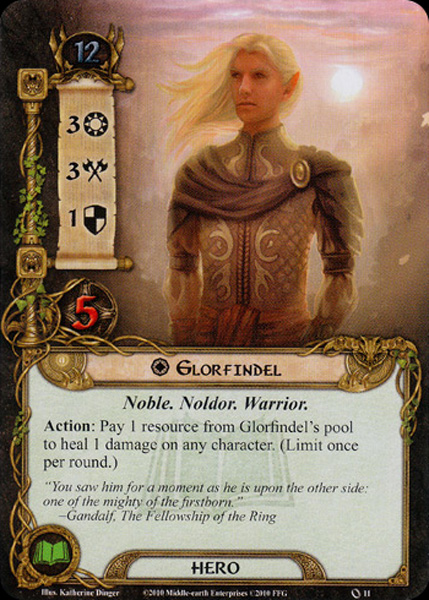 I really don't understand why people hate Lorefindel. He is expensive and bans both other versions of glorfindel, but as a natural match with asfaloth and a very effective direct damage counter, I'd say he's pretty good. Not stellar, mind you, but good.

Wandalf the Gizzard 1989
People hate him because his threat cost is way too high - he's got lots of willpower and attack, but no easy way to use both (I'm pretty sure readying is more of a spirit thing than lore) and lots of hit points but hardly any defense, which means he's pretty useless as a defender. He'd be an okay archery damage soak, but that's a long time away from the core. And his ability is dumb - 1 resource is way too expensive for healing a single point of damage, and it really shouldn't have been limited. — TheNameWasTaken 7 6/6/17
So not really one reason as much as that he's just not efficient. Okay, I see your point, but funny to say, he's responsible for lot's of my wins. — Wandalf the Gizzard 1989 7/1/17
But really, only Haldir and Treebeard are better attackers (Loragorn is a tie), and only Treebeard is a better quester (though there are lots of less expemsive two willpower heroes in lore. Plus, he is one of the best undefended attack sinks out there — Wandalf the Gizzard 1989 7/20/17
7

I don't play Glorfindel much, but if I do, I usually pair him with Gimli or Glóin mainly because of his ability, which can always help in control of damage. His stats are quite good, but his threat is too high for what he can do. It's really hard to play both and so most of the time you can't use his full potential. Also he is more playable in scenarios, where the starting threat is not so big deal. But I try to built deck around him, just to find out if he can be better. Interesting artwork. Verdict: 4/5.

Without any doubt, Glorfindel pales in comparison to Glorfindel. However, the Lore version is still very useful if you build around his deficiencies.

I still use Spirit Glorfindel but I always include at least 1 copy of Thorongil so that I can have his Lore version too. That way I have access to Lore, Asfaloth and his healing too.