Action: Discard Westfold Outrider to choose an enemy not engaged with you. Engage the chosen enemy.

"Erkenbrand of Westfold has drawn off those men he could gather towards his fastness at Helm's Deep. The rest are scattered." Rider of Rohan, The Two Towers
Diego Gisbert Llorens

The Voice of Isengard #6. Tactics. 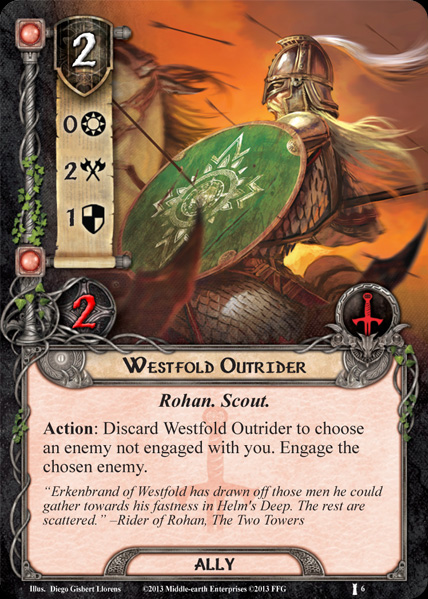 An incredibly useful ally. First examine the stats: 2 for 2 resources is a good deal regardless of anything else. His single point of is unlikely to matter, but with archery and/or other direct damage flying around the second hit point could be useful. That statline is the same as the Veteran Axehand from the Core Set, who doesn't have an ability and still saw a decent amount of use just for those stats. So the Outrider is a good deal just as a generic cheap attacking ally. With Théoden he could be 1-cost, even. His Rohan trait also allows him to work with other Rohan cards, but most of those would involve discarding him for some reason other than (and probably less useful than) his own action - not to mention in a dedicated Rohan deck which runs those cards you probably have other Rohan allies you'd rather discard to trigger those effects. The two bits of Rohan synergy which definitely can work pretty well with the Outrider are Éothain and most significantly Gamling, since both of those can trigger on the Outrider's own ability - the ability is useful in and of itself though, without needing to get an extra ready or recycle the Outrider afterwards.

So let's talk about that ability. Discard to engage an enemy. The Rohan trait in general can have some problems with the need to keep discarding its allies for benefits leaving a somewhat lacking board-state, and one has to debate if the benefits in question are actually worth losing the ally and the investment of resources it represents. The Westfold Outrider is definitely one of the good ones though. Of significant note is that the Westfold Outrider's ability is just a generic action, so it can be triggered in any action window where you want to engage an enemy. This gives great flexibility if pairing up the Outrider with Dunedain such as Halbarad, Halbarad or Heir of Valandil which will benefit from being engaged with enemies earlier in the round, or with heroes Mablung and Faramir whose abilities are limit once per phase. For particular uses, the Outrider can obviously be used to engage enemies which for one reason or another cannot be optionally engaged. The Outrider can be triggered in or before the Quest phase to engage an enemy from the staging area and thus stop its counting against you - this sort of 'quest insurance' can be incredibly valuable. It can also be used to make sure enemies end up engaged with the deck which is equipped to handle combat. In a situation where combat power is spread out, it may transpire that one deck has better (non-Sentinel) defenders while the other has better (non-Ranged) attackers, in which case if the Outrider appears on the attacking side he can be used to drag over an enemy after it has been defended. The extreme version of this is that if correctly timed the Outrider can actually prevent an enemy attack, as follows:

This setup obviously isn't restricted to 2-player, it works at any player count so long as the player with the Outrider is earlier in the player order than the player whose enemy he is engaging. It also doesn't matter if the Outrider player has no engaged enemies, you are still considered to go through the step of resolving all his 0 enemy attacks and concluding that step. Now, as I said, that's an extreme example, which isn't going to come up very often. But then, it's also an extremely potent example, so it's not necessary to justify the Outrider's spot in a deck - it's just potentially icing on the cake of the other uses of the Outrider which will come up considerably more often. Very handy flexible control over enemy engagements, and solid stats to make use of until you need to trigger that ability. Well worth it.

Warden of Arnor 5211
To your point, his ability is also amazing in solo after the conclusion the enemy attack step. Trigger his ability, pull an enemy out of staging, and kill it before it ever had a chance to attack. — Ring Maker 108 6/7/22
@Ring Maker: From what I understand, this only works in True Solo if you already have at least one enemy engaged with you; with no enemies engaged you immediately move from 6.7 “Player Attacks” begin&quot; to 6.10 “Player Attacks” end with no Action Window. — GIBraag 15 7/7/22