Response: After you engage an enemy, add 1 resource to Mablung's resource pool. (Limit once per phase.)

But the Captains of the West were well warned by their scouts, skilled men from Henneth Annûn led by Mablung...
The Return of the King
Sebastian Giacobino 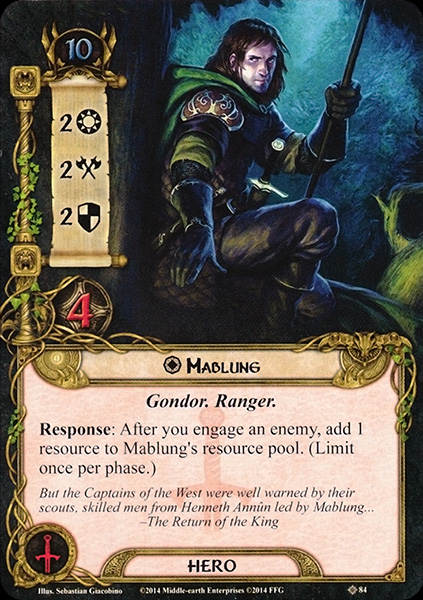 A hero who I tend to find doesn't get as much credit as he deserves. He's clearly not geared towards making flashy plays, but the flashy plays are often less significant than the consistent power of support abiilities like Mablung's resource generation. And let's look at that resource generation for a moment, comparing it to other heroes who generate resources - Théodred has to quest with only 1 , not really a cost but a minor restriction; Glóin has to take damage while Arwen Undómiel has to discard a card, an additional cost to gain the resources, even if it can be mitigated; Thorin Oakenshield requires you to reach 5 Dwarves and Amarthiúl requires two engaged enemies, so they take some setup (and the latter can be a somewhat risky prospect). But Mablung? His only requirement for generating additional resources is that you engage enemies, which in the vast majority of cases is something you're going to be doing anyway. They're basically completely free resources as much as the bonus two you get from Denethor, putting Mablung alongside the noble Steward as the easiest resource-generating glue hero to just drag and drop into any deck using his sphere without any other changes being required.

Further to this easy drag-and-drop nature is his flexible statline - other heroes' stats will dictate what they end up being used for and that will in turn have a bearing on what other heroes you pair them up with, but Mablung can fill whatever role you particularly need in your deck (and for that matter in any given round during the game). 2 makes him a creditable quester, especially in the generally -light sphere, he can be a decent attacker (and has excellent synergy with Gondorian Fire if you want to power him up in that direction) and he can also serve as a defender (especially given a Gondorian Shield).

While I've mostly focused thus far on the fact Mablung places few or no restrictions on your deckbuilding to make him work, you can also build around his ability effectively if you so choose. I already mentioned Gondorian Fire, obviously, and otherwise you can focus on triggering that ability more - it's limit once per phase, which means theoretically he could generate 7 resources in a single round if you have that many means to engage enemies (and that many enemies to engage). Son of Arnor, Dúnedain Hunter or Knight of Minas Tirith can get you an enemy in the Planning phase, in the case of the Hunter potentially getting you the extra resource you need to play another important card; Westfold Outrider can let you grab another enemy at any time you like; Tireless Hunters with Mablung becomes effectively a free event and can be very helpful; and of course Aragorn gets you extra enemies on killing the ones you have for a nice hero pairing. Alternatively for hero pairings, Mablung obviously also goes well with other heroes who trigger on engaging enemies, like Faramir, Sam Gamgee and Pippin so you can double or triple up the benefits you're getting.

For the reasons I've described - his extreme flexibility combined with the fact that resource generation is one of the most powerful effects in the game, I consider Mablung to be one of the most powerful heroes in the game, and creditably ranked in the full list of heroes from all spheres as well. He responds well to some specific attention in deckbuilding but doesn't require it, regardless providing an incredibly potent effect essentially for free and slotting into whatever role you feel like putting him into. Mablung is basically all upside.