Response: After Legolas participates in an attack that destroys an enemy, draw 1 card.

"He stands not alone," said Legolas, bending his bow and fitting an arrow with hands that moved quicker than sight. The Two Towers
Sebastian Giacobino

The Treason of Saruman #5. Tactics. 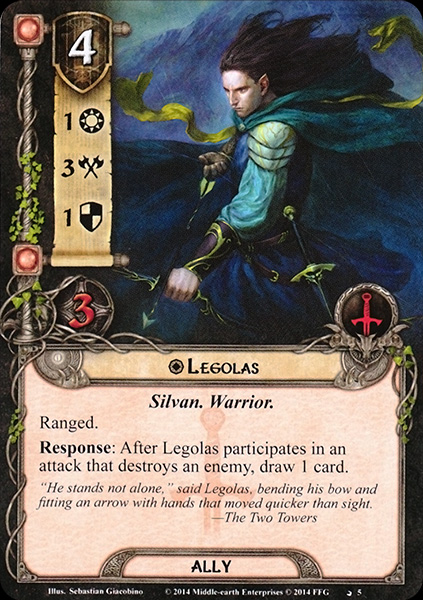 Tactics from the start of the game has had a rough go. Sure the heroes are all strong warriors but but in a game where only 1/3 of the encounter cards require you to fight something, they often fall short of the two things that help beat quests, getting an engine going (resources/card draw) and Willpower.

Legolas Ally was a push to fix the former, and did it ever work. At 4 cost he is expensive in a sphere that has trouble with resources, but there are ways to help mitigate the high cost: Mablung (extra resources for engaging), Hirgon (play for a -1 cost after questing successfully with him) and Prince Imrahil Tactics (matching hero trait lets you summon Legolas if you are lucky or have some deck manipulation) from the heros department can get him into play easier. Elf-Stone, Timely Aid, Send for Aid or Vilya are also great options if you are going to mix in some Lore or Leadership. And there is no better ally for The Tree People to summon then our Silvan hero.

Once you get past the cost requirements what are you getting?

The same stats from his hero version are present minus 1 hit point. Having an ally with 3 Attack already puts him into a somewhat exclusive tier alongside some of the strongest allies in the game, and being Ranged means you will always be able to use his attack if there is an enemy somewhere.

The real kicker comes from his ability, which allows you to draw a card whenever Legolas participates in an attack that helps destroy an enemy. At a minimum you are getting one card extra a round now, this is huge in a sphere that is limited to this card and two events requiring specific combos to gain cards. And there is no limit, so if you have ways to ready an ally or all characters you can draw as many times as he helps kill an enemy.

What finally pushed me to review this card is the new contract that allows this Legolas to become a hero. From the start you get a more efficient cost then his core set version. Especially since you aren't usually using him for anything but attacking. And now instead of placing progress, each time you ready and help destroy an enemy you are rewarded with card draw, the equivalent of looting enemy corpses for items. Legolas is easy to get around the once per phase restriction with cards like Quick Strike, Hands Upon the Bow and anything you can do to recycle those events.

At a minimum you can easily draw two cards in each combat phase, while helping kill your enemies!

He is able to take all of the Silvan weapons to further boost his attack up, and even more so in his hero version with the contract. Try throwing a weapon on and using Foe-Hammer for an insane 4 card draw!

All in all this Legolas is an amazing ally and an even better hero and helps Tactics overcome one of their biggest weaknesses.

For an unusual Tactics deck that can quest well and draw cards check out: ringsdb.com

And definitely plug this ally into your decks that can take him!