Response: After Hidden Cache is discarded from your deck, add 2 resources to the resource pool of a hero you control.

...there was a good deal of food jumbled carlessly on shelves and on the ground, among an untidy litter of plunder...
The Hobbit
Aurelien Hubert 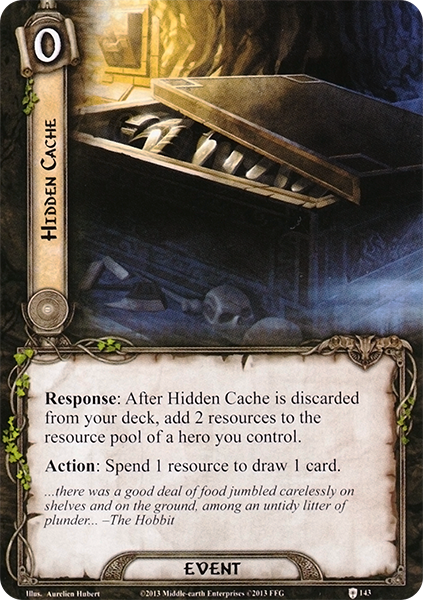 This card is one of my favourites from its cycle. It's just so fun to play around with!

So firstly, the action is not that great. 1 resource for 1 card isn't a great trade. That being said, even you have resources going spare you may as well do it. Given the choice though, you want the Hidden Cache to go straight from deck to discard wihout passing through your hand en route. That way you can trigger the response, which is fantastic.

Now, Hidden Cache is definitely not for every deck. It depends on you having means whereby you can fairly reliably discard it from your deck. There are many possibilities for deck discarding of course, but make it so your Caches will reliably work is another matter. Just including Emery or Ered Nimrais Prospector isn't really enough on their own. For preference you really want something repeatable, because to have better chances of discarding the Cache than drawing it into your hand you obviously want to be discarding a number of cards at least comparable to the amount you're drawing. Anything which gives you additional control over the order of your deck obviously helps as well. So assuming you have discard options, Imladris Stargazer and ally Galadriel both help you set up Caches more consistently, but perhaps the best option for this is the combination of arrange, discard and draw that is King Under the Mountain - look at two cards, discard one. Obviously choose to discard the Cache (looking at cards does not change their state of being in your deck prior to you choosing to add one to your hand and discarding the other, so it's still discarded from your deck despite the fact you've already physically taken it out).

Other good options are the classic Zigil Miner, Expert Treasure-hunter (best paired with hero Gandalf and then facilitated with Wizard Pipe for resources every round), Longbeard Sentry and A Very Good Tale (not repeatable like the others, but 5 discards per play means it can still be a favourable ratio to your draw, though more likely you're pairing it with some of the other possibilities).

Whether you're just wanting to extract a few extra resources out of your Zigil while playing Caldara, hunting for (and finding) treasure in a Gandalf deck, or you've gone all in on Dwarven mining and will be discarding a Cache with a Prospector, then shuffling that Cache back in to discard it with something else later the same round, I find that there are few individual player cards (heroes excepted) that have more simple fun to them than that feeling when you see a Hidden Cache land in your discard and suddenly you can afford that other card you really wanted to play.

I think that this card could be my favorite card so far. It is very fun to play, that feeling of anticipation every time you discard a card is great. In a right deck, it could be better than Steward of Gondor. Not so consistent, but net gain of resources could be better and you can place them where you want them.