Action: Discard the top 2 cards of your deck. You may attach 1 attachment card discarded by this effect to an eligible Dwarf character in play.

Gimli the Dwarf alone wore openly a short shirt of steel-rings, for dwarves make light of burdens...
The Fellowship of the Ring
Blake Henriksen 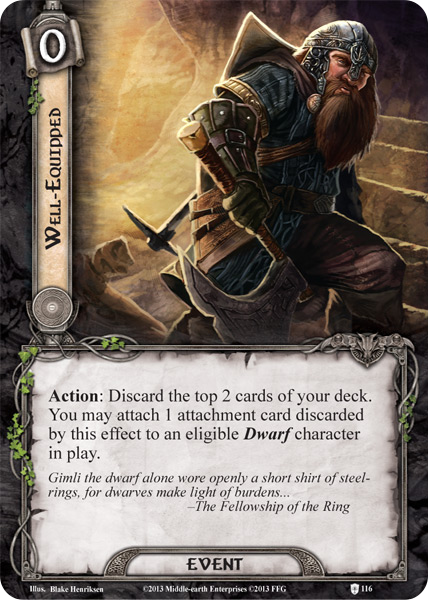 Well-Equipped is an interesting card, but a difficult one to use well. The reason for this is that it is obviously explicitly a Dwarf card by its text, but it doesn't naturally synergise with the standard dwarf deck strategy, since Well-Equipped is attachment focused whereas the standard approach of a Dwarf deck is to spam allies. So naturally there's a bit of a disconnect.

That's not to say it can't work out pretty well though. It's just different to standard Dwarf strategy, but speaking as someone who finds standard Dwarf strategy to be often a bit on the boring side and definitely not in need of further buffs, I like that this Dwarf card supports an alternative instead. The most obvious Dwarven candidates for this card are Gimli and Glóin, both of whom are very keen on their Citadel Plate and would love to have it for free. Beyond those though, if we're going for something a bit more generally Dwarf-focused, Well-Equipped is of course a very nice fit for the whole Dwarven mining mechanic in that it gives yet another way to discard cards from your deck, and if you're already planning on discarding a high proportion of the cards in your deck then you probably have some decent plans for what you're going to do with all those cards in your discard pile once they get there. With the advent of cards like The Evening Star and Elven-light, fillilng the discard instead of your hand is not necessarily such a bad thing, not to mention the more mining specific Hidden Cache and Ered Luin Miner, and of course the still very potent Core Set staple that is Stand and Fight. This card can also fit very nicely into a Caldara deck simply as a means of getting more allies into the discard pile without you needing to care about actually putting attachments into play.

So this card works nicely if oddly as a simple means of seeding the discard pile, but that's completely ignoring what is supposed to be the actual point of its ability. So what about that? Free attachments? Well, obviously getting anything for free is great. The above-mentioned option of Citadel Plate on Gimli or Glóin is perhaps the most extreme since saving 4 resources is a pretty massive deal (more so for Gimli than for Glóin, since the latter can have an odd habit of ending games with enough money to buy every kingdom in the world and have some left over, but it still at least gets him going a bit faster). Sword-thain onto a unique Dwarven ally is another good possibility pioneered in particular by Seastan for the aforementioned context of Caldara decks (since Caldara doesn't really care who the Sword-thain is so long as she has one). But we need not go so high as 4-cost for this to be good. Saving 2 resources on an Unexpected Courage, Steward of Gondor or King Under the Mountain is still great. Even if you only get a 1-cost or for some odd reason only a 0-cost attachment out of it, at least you're still accelerating your deck, because you're effectively drawing the card and playing it at the same time, for free. Albeit in those cases there may be more of a debate as to whether it's worth the loss of the second card which is discarded.

One important point to note is that since the text of Well-Equipped says the attachment is discarded, then attached, this is not the same as playing it and thus you can get around the play restrictions on Lembas and Ent Draught, both of which just happen to be potentially very useful cards for Well-Equipped advocates Gimli and Glóin.

Well, that's covered decks which can make good use of Well-Equipped, but it still remains a bit difficult to use well in some cases. If you're in, say, a Caldara deck or something else which just wants to discard as fast as possible, then it's fine, though you have to bear in mind that of course it's an event of which you can have at most 3 copies so if deck discarding is an important strategy then you'll have to have other means of doing it as well. If you want to trigger the actual effect reliably on the other hand, then you really need a way of stacking those top two cards of your deck, be it hero Gandalf and the Wizard Pipe, Gildor Inglorion, ally Galadriel or the old favourite, Ziggy's best friend the Imladris Stargazer. Stargazer is easy enough to bring in, as is Wizard Pipe so long as you're OK with running hero Gandalf, but it's still important to note that this is additional setup required before you can reliably make good use of this event, which may be considered to belie the assertion that it's completely free. It's a good card in the right deck all the same.