Attach to a unique ally belonging to any sphere of influence.

"But why, lord, did you receive me as sword-thain, if not to stay by your side?"
Merry, The Return of the King
Tomasz Jedruszek 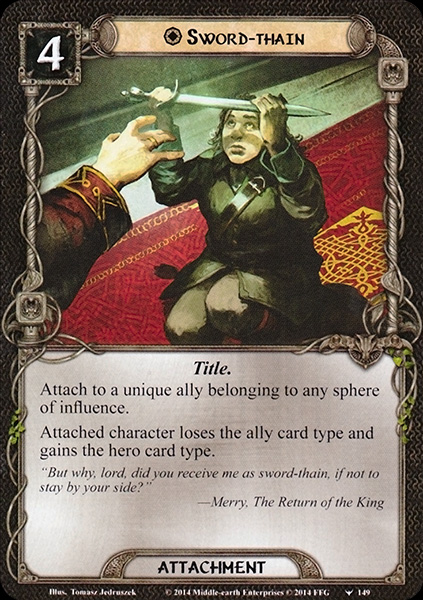 The text of this card is very simple. The use of it is incredibly complicated.

Let's start with the simple clarifications. One, "belonging to any sphere of influence" rules out Neutral allies. Unique Neutral allies cannot have Sword-thain attached - the only exception would be Gandalf with Narya attached as Narya gives him a icon, meaning he belongs to the sphere and is thus an eligible target (would also work with Core Gandalf but since he leaves play at the end of the round that'd just be a waste of resources). Two, gaining the hero card type does mean that your new Sword-thain hero will collect resources in every Resource phase like your other heroes, and whichever sphere they belonged to as an ally is their printed sphere as a hero.

The question then is how does one make good use of this card. Well, it effectively provides resource generation, which is always useful, but if that's the only thing you're using it for then you might as well be playing Resourceful out of Secrecy - not an absolutely terrible idea but not what you'd generally consider optimal. So to really justify the use of Sword-thain you want to be getting something out of it beyond the extra resources. Well, unless you're not paying for it. If you bring in Sword-thain for free with Vilya or Well-Equipped then the extra resources are a fine benefit to be getting out of what ended up being a free attachment. If you're paying for Sword-thain though, most likely you have some other idea in mind, to which the resource generation is more of a bonus, or perhaps a mitigating factor to the cost - the thing you're actually getting out of having a Sword-thain is perhaps not worth the number of resources you're paying for it, but it becomes more acceptable with the knowledge that you will recoup those resources over time.

So what can you get out of having an extra hero?

Again, very simple text, but very complicated and difficult to find a good use for. If you want to find uses for this card though, everything I've suggested here would be good places to start. Ideally you try to combine multiple things throughout your deck or even a multiple deck Fellowship to really get your money's worth. But if you do build around the use of Sword-thain it can be very useful.