Each hero with a printed resource icon gets +1 .

'To me! To me!' cried Théoden. 'Up Eorlingas! Fear no darkness!' The Return of the King
Magali Villeneuve 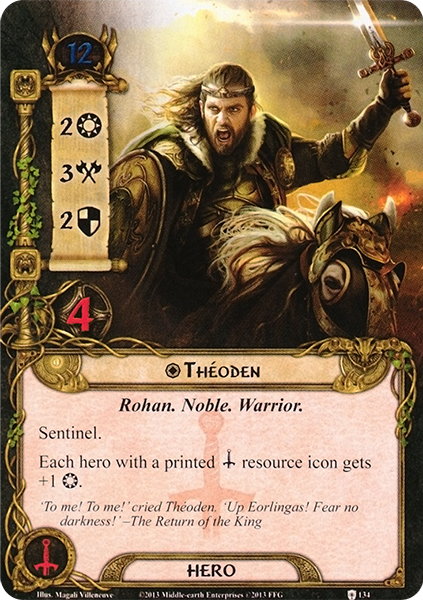 Now, I have in the past advocated for the fact that I don't think Theoden is as bad as people think he is, most notably in this old blog post: wardenofarnor.wordpress.com However it is important to point out that there is a wide gulf between "not as bad as people think he is" and "good compared to the majority of heroes". Theoden is certainly the former, but he is unfortunately not the latter. Nor did he represent the great boost to mono- decks he was supposed to be, for one simple reason - mono- decks, by and large, are not supposed to be questing. Now it's certainly worth noting that having a mono- deck able to contribute to questing may come in handy, but in general if you're building a deck it's intended to be a big combat powerhouse.

Now Theoden did offer some potential perhaps for solo mono- where you have to do everything with one deck. But even there I was always skeptical, since has a shortage of allies who can quest effectively and if you're putting all the questing load on your heroes you're left completely depending on your allies for combat, despite the fact your heroes are probably good at it (And doesn't have the generic readying to let your heroes do both).

So what are Theoden's good points? Well, one simple one is that while his ability is easy to denigrate, every point of helps, especially in the early-game, and Theoden's boost obviously starts the game in play. Add to that the fact that you mostly won't have to deal with combat immediately on starting the game (so your combat heroes may be less immediately useful in their primary role) and he may help greatly in establishing an early questing foothold. And once that's established and you have better sources of ? Well then you have all those good combat stats and abilities to fall back on. In this respect I suppose people's lack of appreciation for Theoden's ability corresponds to their lack of appreciation for well-rounded statlines, since Theoden's ability largely serves the purpose of making statlines more well-rounded than they were previously - and there's serious value in having your heroes not pigeonholed into a certain role every single round.

Another good point is that sometimes you want access to the sphere for the combat goodies so you can play them onto a hero in another sphere, obvious examples being Dúnhere or Haldir of Lórien. In that instance having another combat hero may be redundant, so having a hero who can quest is helpful because you can get the sphere access without having to accommodate another attacker or defender. On the other hand, Merry and when she's released Éowyn would be perhaps better choices for that slot, with their lower threat costs. The next point would be the potential for using Theoden as something of an enabler - for example he can give Beregond the extra point of he needs to survive The Redhorn Gate, or his boost can help heroes in those quests where you end up attacking or defending with your . There's also the fact he can make good use of Herugrim and Snowmane, and sometimes you don't want to be using Théoden, as good as he is.

The final point is that questing is becoming more reasonable of an option as the game's life continues. I mentioned Merry and Eowyn further up, and Mablung is another hero who is just fine for questing. So while I was skeptical when I first saw him and remained so for some time, I am now coming round to the idea that you could have a mono- deck where the heroes mostly just quest and the allies handle combat. It's still not something I'd think of as an optimal strategy, but it's certainly viable, and sometimes you want to do the more gimmicky things.

So, that's actually quite a lot of good points to Theoden. But that's now. At the time of his release, I would say the strong negative reaction was not wholly unjustified. He's had a bit of a slow-burn, getting better with time, as many things have, but when he was released he was pretty dubious and certainly not a great boon to mono- decks. He gives more options, but back then they were mostly not very good ones. Even now, while I think he's good, I don't think he's at his best in mono-sphere, because with that statline, while versatility is nice you really want to get some Unexpected Courages onto the table, so as an intended mono-sphere card I would say he was not well designed for his archetype, especially not at the time of his release. That said, don't let past impressions permanently colour your viewpoint - he's way more usable now than he was then.

Warden of Arnor 5211
I think the new Elfhelm Hero probably benefits Theoden more than anyone, just because he's one of the best targets to double-dip on the Elfhelm bonus. Theoden + Snowman + Herugrim + a song of the corresponding sphere is a questing and combat powerhouse. Of course, the big problems are that Theoden + Elfhelm is a pretty high-threat starting lineup, and Spirit Theoden can do the same thing (albeit with one lower willpower), but with a natural in-sphere match for Snowmane and Herugrim. So... yeah, pretty much on the nose. He's not unusable, but he's not really that good, either. — Some Sort 3195 6/29/16
5

Having just taken Theoden, Thalin and Boromir through the Redhorn Gate I can say that he is definitely underrated. If not for his +1 boost to willpower both of my other heroes would have died at the final quest phase.

But outside of "low willpower means you can't X" effects for tactics decks what else is he good for?

Well for starters his boost applies to himself, so right out of the gate he is questing for 3. You add in his family Eowyn and that jumps up to an 8. He also can make Thalin contribute to the quest instead of just by damaging enemies. Characters with 2 willpower like Mablung and Merry also pair well to potentially put your starting questing power at 11 (when combined with our aforementioned Rohan heroes).

But the hero I absolutely love to combine him with the most is Boromir. His natural readying effect is great but adding an extra willpower didn't seem worth the threat before. Now that it's doubled you can quest hard with all of your heroes, and still have super Boromir standing by to ready and deal with any enemies that pop up. It's a great way to quest powerfully and race through scenarios.

Here is a link to the above named deck:

Sword-Thain also has added value on your unique tactics allies to add another hero. Golden Shield also combos well with its king. And if you add some Songs of Travel into your deck you could potentially get Herugrim, Snowmane or Steed of the Mark as well.

In closing for sure there are better heroes. But I would argue that there has not been a better hero for Mono-Tactic solo decks. As he corrects the main weakness of Tactics since the beginning. And appropriately I believe he was primarily made for the solo mono-tactics deck which fits the theme of the cycle he was release in. If you haven't given the Rohan king a try, he is that missing piece for you mono-tactics decks.