If attached hero is Theoden, Snowmane loses the restricted keyword.

Suddenly the king cried to Snowmane and the horse sprang away. The Return of the King
Julepe 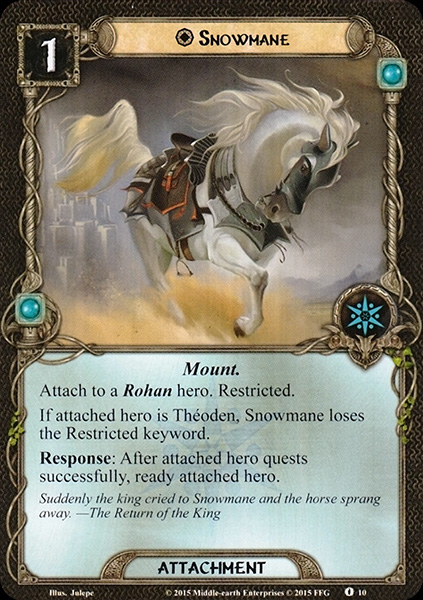 Even with all its limitations (only Rohan, costs a Restricted slot unless you are Theoden, unique) Snowmane it's a really good action advantage card and can go on a few good targets, like Éowyn and both versions of Theoden. It can also be fetched by the in-sphere Westfold Horse-breeder. In my play experiences we end up playing it on Théodred since it's the only Rohan hero we have and being able to use his 2 is nice.

Snowmane never fails to make it into my Rohan decks. It's like a cheaper Unexpected Courage that can be searched for with Westfold Horse-breeder. UC is still the better card as you can ready your hero before staging and it isn't restricted, whereas Snowmane is (except on Theoden) and may not ready your character if you manage to quest unsuccessfully, but this is unlikely in a Rohan deck where is usually fairly easy to come by.

Any Rohan hero would benefit from Snowmane, but any variation of Theoden or Eowyn are always a good shout particularly if they have Herugrim or a Golden Shield in hand to make additional use of their high in combat. Théodred is also a good target as it means you aren't wasting his best stats by questing all the time, though I typically use Heir of Mardil on him. Snowmane is more consistent than HoM though as you will often want to use Theodred's ability to give a resource to another hero. As a mount attachment, Snowmane also has good synergy with Elfhelm, particularly if you give him Song of Travel and Song of Battle to boost his and respectively.

Snowmane has limited use outside of a Rohan deck as you would require Nor am I a Stranger to play it on any other hero, but more repeatable readying is never a bad thing, so this strategy may well be worth exploring.