Combat Action: The engaged player discards Ambush to declare an attack against the attached enemy.

"But we have a new errand on this journey: we come to ambush the Men of Harad." Mablung, The Two Towers
Cristina Vela 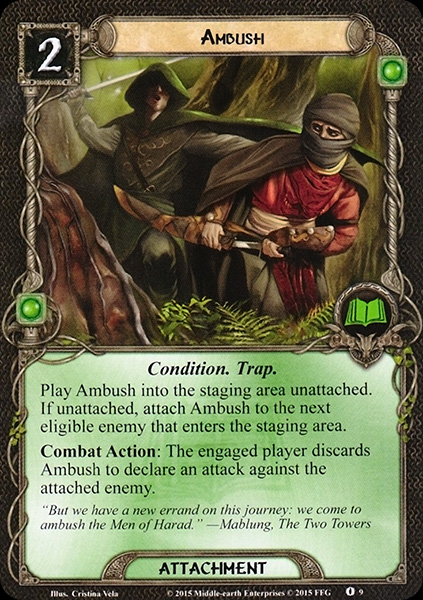 This trap is easily my favorite. It's best in a solo game as there is usually only one enemy added a round except on some of the more combat heavy scenarios. And obviously should only be played with Damrod the king of traps for the cost reduction and card draw bonus. But if you go that route this card is incredible.

For 1 resource you essentially have Lore's version of Hands Upon the Bow but you can use as many characters as you want. Being able to to crush an enemy before they launch their attack is awesome as you don't have to use a defender or play the shadow effect game.

If you add in ally Anborn you can do this every single round and be able to launch your first strike attack forever.

This card is balanced by the fact that you pretty much want to play it only in the above combo. And that there are plenty of big bad enemies that are immune to player card effects and attachments. So you will want to pack some other options for those quests.

But for the majority of quests this is a great option.

A cool concept for a trap, but too expensive in my opinion. It can be compared to Hands Upon the Bow, which also lets you make a one-time attack into the staging area, but with several differences: Ambush allows multiple attackers and is not restricted to a ranged character, but also suffers from three severe drawbacks:

1) You have little control over which enemy Ambush is attached to (always a challenge with traps), whereas you can target specific enemies with Hands Upon the Bow to make sure you can actually eliminate them with that one attack (otherwise attacking into the staging area is somewhat pointless).

2) Ambush results in a Combat action, whereas Hands Upon the Bow can be played before quest resolution and can therefore even help with questing.

3) Ambush costs 2 resources, whereas Hands Upon the Bow only costs 1.

Of course there are some further subtleties to consider, but as it is I would only consider Ambush in decks with Damrod. And even at the reduced cost and with one extra card drawn it is not clear to me that Ambush would be favorable over Hands Upon the Bow. As a house rule, I would reduce its cost to 1 and/or add some defense reduction to make the card more attractive.