Hands Upon the Bow

Action: Exhaust a character you control with ranged to immediately declare it as an attacker (and resolve its attack) against an enemy in the staging area. It gets +1 during this attack.

"We live now upon an island amid perils, and our hands are more often upon thr bowstring than upon the harp."
Haldir, The Fellowship of the Ring
Magali Villeneuve 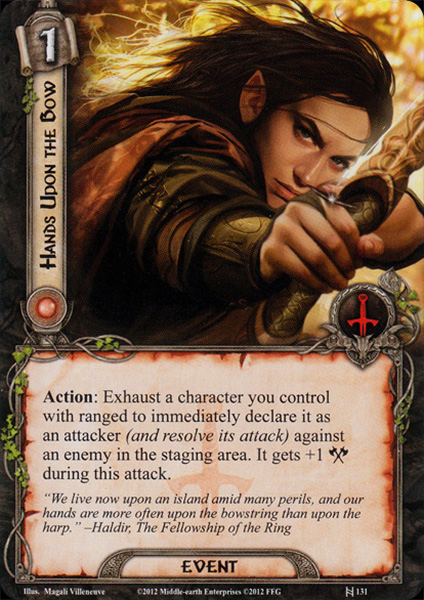 Hands upon the Bow sees a good deal less use than I think it should.

Its drawbacks are rather small. You must have a Ranged character to activate it, but there are lot's of good Tactics Ranged heroes to take advantage of this card. Also, you can only attack against enemies in the staging area, but most enemies will give you chance to ping them before they engage you.

On the other hand, HutB is quite easy to use. Since it's in the Tactics sphere, it's easy to get your target to a high level of attack; especially with the cherry-on-top built-in attack boost. It only costs one resource, which is a low price to pay for what is essentially a Feint with a willpower boost. You can't tell me that's not good.

The ability to outright nuke an enemy in this manner and with such ease is just golden. The satisfying feeling you get from playing this card is second to none (okay, except maybe the Door is Closed), and the art is just icing on the cake.