Each Dwarf gets +1 hit point.

"We will seek the hidden door together. And we will come through. In the ruins of of the Dwarves, a dwarf's head will be less easy to bewilder than Elves or Men or Hobbits."
Gandalf, The Fellowship of the Ring
Jake Murray 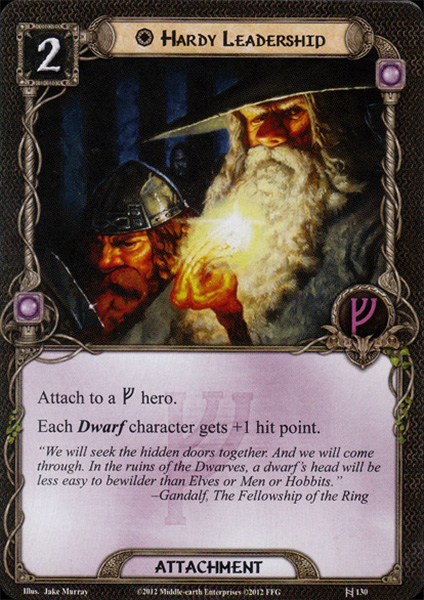 This is a great card which I think doesn't always get its due. In the category of powerful Dwarf deck attachments, certainly it's somewhat outshone by Legacy of Durin and King Under the Mountain, because as we know, card draw is king (under the mountain). But it's still pretty incredible for all that, and especially so since the playstyle of a Dwarf deck is typically focused on swarming allies.

So, quick breakdown. First, it's potentially important to remember that it says "Attach to a hero." A hero rather than a Dwarf hero, so if you have a lot of Dwarf allies in play you need not have Dwarf heroes to make use of this. And of course the effect is very simple, all Dwarves get +1 hit point. It's a global boost which applies to all Dwarf characters anywhere on the table, not just ones you control. I believe this is one of only two global hit point boosts in the game, the other being Bill the Pony for Hobbits. Hardy Leadership is much more useful though, because any global boost is more useful the more characters in play are getting the boost, and as mentioned, Dwarves focus on swarming allies, so any Dwarf deck should get a very substantial number of hit points out of this.

Now it must be pointed out that Dwarves tend to have pretty good hit point values anyway, with a decent selection of 3 HP allies, which is very good. But extra is pretty much always going to be useful. Obviously Core Set heroes Glóin and Gimli can get significant benefits out of extra hit points, but just having more on all your allies is great. Consider an Erebor Guard - pretty solid ally defender, barring shadow effects can survive attacks up to 4 . With Hardy Leadership in play he can survive up to 5 , or take more shadow effects than he previously could. Many dwarf allies make decent backup defenders because while they lack they have the hit points to survive a hit - the Erebor Hammersmith is an obvious example of this - and giving them all an additional hit point makes them that much better.

But that's not even the best bit. Defending is significant, but the biggest benefit of a global hit point boost is for dealing with direct damage. A search for the 'Direct damage' encounter card category on Hall of Beorn yields 128 results as of me writing this, I'm pretty sure it's not catching everything, and in general the problem of direct damage has gotten significantly worse as the game has gone on. Of course you include healing to counteract it, but you need to survive until you draw that healing, preferably without killing off a bunch of your characters, so you need some decent hit points pools to draw on. Given a swarm of Dwarves with already good hit point pools plus Hardy Leadership there's little chance of you getting overwhelmed by the damage even if you don't even bother with healing at all. A Dwarf deck using Hardy Leadership can guaranteeably shrug off things like The Necromancer's Reach or Blocking Wargs; they needn't be too worried about Low on Provisions or Biting Wind; they can take Archery damage on the chin no problems; and they can probably stand up to Naurlhug for a decent amount of time without anyone getting incinerated.

I could go on, but I think I've said enough. When you're playing a quest with a lot of direct damage effects in it, the difference between playing without Hardy Leadership versus with it is night and day. In one case you're constantly worrying you'll reveal too many direct damage effects and weighing up which characters you can most afford to lose; while in the other you have no worries as your Dwarves weather the torrent and stroll through the quest with everyone still alive and barely seem to break a sweat. In general I would always like to have at least 1 copy of this in a Dwarf deck with access, and against certain quests it can easily be a 3x and potentially even a mulligan card.