Over Hill and Under Hill #14. Leadership. 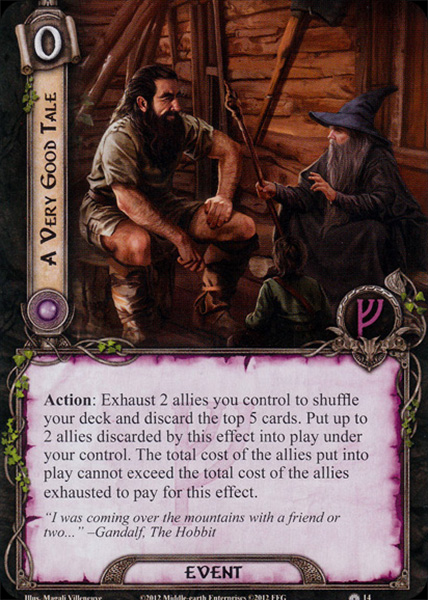 My absolute favorite card in the game. often times people feel prohibited by the cost of Allies and don't want to include them. This card solves that dilemma and is just all advantage all day. You can make extra use of it in Noldor decks because there is a lot of discard pile play, but I find that I generally don't mind when things are trashed in order to get a boost in Ally power, regardless of Trait specificity. A shout out to Allies that 'Leave play' at the end of the round because you can use A Very Good Tale at the end of the round when they ready, but before they return to your hand or whatever (Elrond, Galadriel, Gandalf, Saruman, Etc.). Also sweet synergy with Sneak Attack as you can Sneak Attack-->Gandalf-->A Very Good Tale for ultimate discounts!

ransomman 208
That's a nice touch recognizing the Noldor synergy....that never occurred to me. Quite the &quot;elf friendly&quot; card given that it works great with the sylvan synergy as well. — MDuckworth83 3054 4/16/16
6

One of the best designed cards in its box and for the development of the archetype it comfortably fits into - that being ally swarm decks. In any deck where the primary goal is simply to get allies on the table as fast as possible (Dwarves, Gondor and Outlands all tend towards this approach), this card is fantastic, because the primary downside is the risk of discarding useful non-ally cards, but in an ally swarm deck the majority of the time you don't really care about those cards - and the fact they're gone means you're more likely to draw more allies on subsequent rounds.

In decks with a different focus it becomes more of a risk, though any deck which can play with its discard pile will be more able to handle it - so decks using cards like Dwarven Tomb, The White Council, Háma, Ered Nimrais Prospector or Galadhrim Weaver potentially have answers to the problem (though in the case of the Weaver, I don't think AVGT lets you choose the order you discard in so that's less reliable). Of course this card becomes less reliable the less allies you have in your deck, so even if you're not all about the ally swarm this is better in decks with more allies. Also works for decks which want cards in their discard pile, so Song of Kings plus A Very Good Tale could fit into a Caldara deck though it'd be a bit odd, or you could use it in a deck which plays around Stand and Fight to cherry-pick allies from the discard pile, or a Noldor deck, and of course any of these decks may well already use Hidden Cache, which will be triggered by the discard.

Thematically, it's great because you exhaust two allies to bring in two more, just as Gandalf introduced the dwarves two at a time while telling Beorn the story of their adventures. Mechanically it's great because although you lose the actions of the two allies you exhaust, you gain the ones of the allies you put into play (unless they're Ents), and in subsequent rounds you'll have all four. It's just generally a great card in the right context.

Also plays well with anything which gives action advantage to allies - Forlong, ally Gimli, ally Glorfindel, Defender of the Naith, ally Boromir, Éothain, Orthanc Guard, Strength of Arms, Leadership Faramir, Galadriel, any of the allies who are discarded at the end of the round because you can trigger this event in the Refresh phase after they ready but before they discard themselves; and quite possibly more I've forgotten. All round just a great, well designed card that does exactly what it's meant to and does it very well.