Response: After Háma is declared as an attacker, return a event from your discard pile to your hand. Then, choose and discard 1 card from your hand. (Limit 3 times per game for the group.)

"Yet in doubt a man of worth will trust to his own wisdom." The Two Towers
Magali Villeneuve 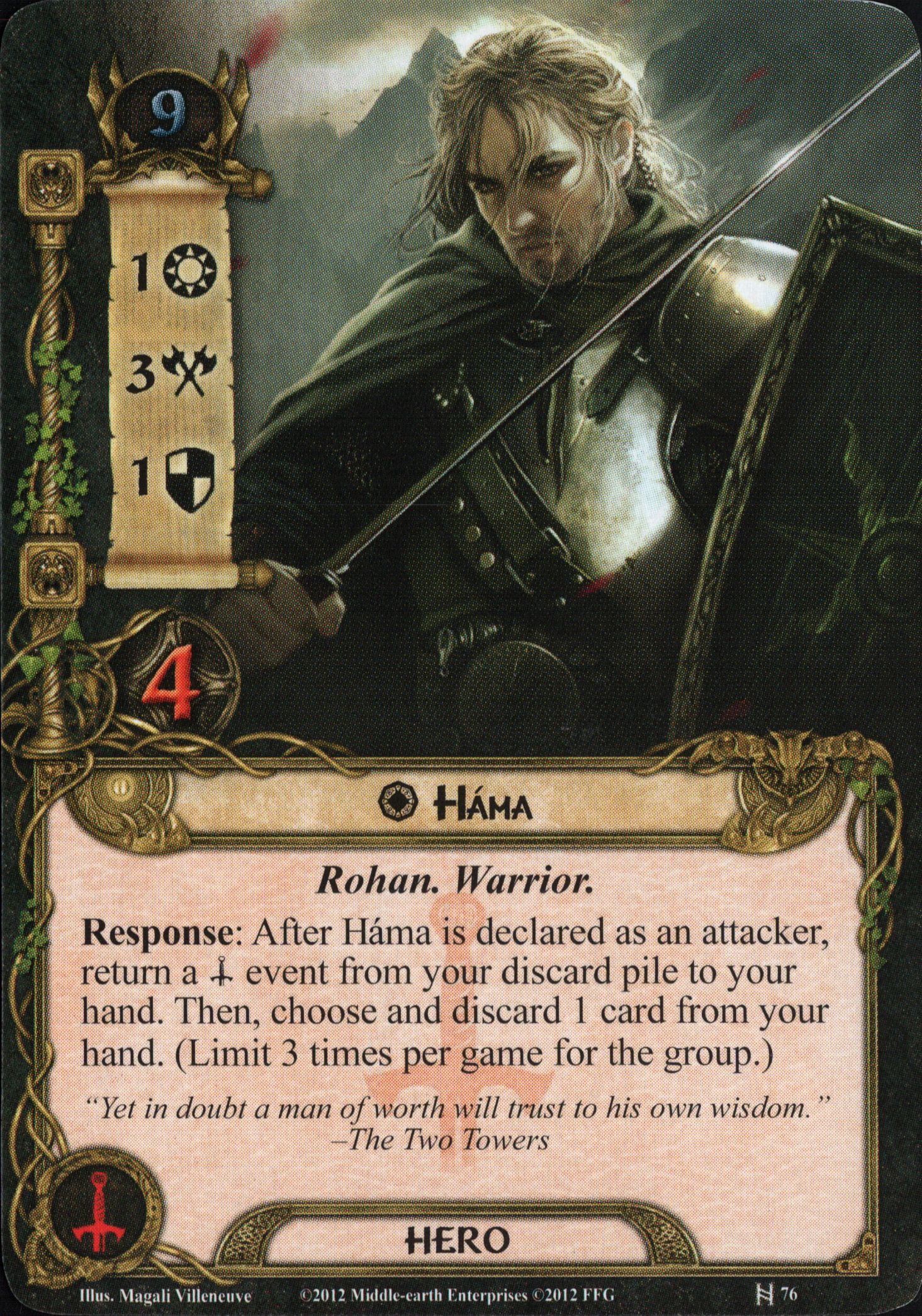 Who is the best Tactics hero in the card pool right now?

Oh, sure, Boromir is the cornerstone of the most broken deck on the block, and he's amazing, but that's as much about how broken Gondorian Fire / Blood of Númenor / Steward of Gondor are as Boromir himself. Aragorn combines a fantastic global debuff with an incredibly powerful triggered ability. Mablung can reliably net two resources a turn, (and, with a bit of work, three or more), in a sphere that has no other built-in means of accelerating its economy. And with a threat three full points lower than any other Tactics hero, Merry occupies a deckbuilding space all by himself.

But overlooked next to that quartet is humble Háma, who developed an early reputation as "that guy who recycles Feint every round". I mean, sure, Feint is an awesome card and the ability to play it over and over is very powerful. But Háma is as powerful as the Tactics event cards, and right now the Tactics events cards are unbelievable. Háma gives you unlimited access to readying effects (Behind Strong Walls, Boomed and Trumpeted, Hold Your Ground!), incredible card draw (Foe-hammer), and direct damage (Skyward Volley, Rain of Arrows, Pursuing the Enemy, Hail of Stones, Goblin-cleaver). He lets you completely break the order of combat and attack out of phase (Quick Strike, Hands Upon the Bow). He lets you recur game-turning global effects, (Charge of the Rohirrim, Forth Eorlingas!, Horn's Cry, Hour of Wrath, The Hammer-stroke, Thicket of Spears). Hell, if he wants to, Háma can even turn Tactics into a questing powerhouse with Trained for War.

And when I say "unlimited", I mean unlimited. While recursion in this game is mostly limited to a series of rare one-off events, Háma's ability is endlessly repeatable. If you pair him with an Elven-light and some Spirit resources, that becomes literally endless; you could have a game that lasted a million rounds and Háma could enable you to play the same Tactics event in every single one of them.

And he hardly sacrifices everything to get such an amazing ability. He ties for the second-best attack of any hero and the second-lowest threat in the sphere. His Rohan trait isn't quite Silvan, but it's still one of the more useful, more-synergized ones on the block.

Usually, the "top-tier" heroes are the ones who give you more cards, more resources, or more actions. Háma doesn't fit in any of those three major archetypes, mostly because he's an archetype to himself. There is no "infinite recursion" bucket, there is only Háma. He doesn't just make existing decks run better, he enables decks that couldn't exist without him. I'm not sure if he's the best Tactics hero, per se. But he's far and away my favorite.

Some Sort 3195
Completely agree. He's one of my favorite heroes to build around because he allows all kinds of funny business. Even in a mono-tactics deck, he can recycle Foe-hammer to keep your hand filled to use his recursion. Or team him up with ally Legolas. — AdmiralACF 34 4/29/16
Bad news. Limit 3 times per game now: https://images-cdn.fantasyflightgames.com/filer_public/2e/31/2e3129b3-dc51-4c27-81ed-6a72f13e82f3/lotr_faq_19.pdf — Sarseth 167 11/15/17
Does anyone play him anymore? We ignore errata and just for break the game so he gets decent table time with us. Curious if anyone finds a use for him or if Book of Eldacar is the better bet without taking up a hero slot. — Christian_Medic 869 7/21/19
4

Hama is quite possibly one of the strangest heroes in the game. First off, on the thematic side, his statline and textbox indicate that you should use him as an attacker when in the books he was the doorwarden for Théoden and his defining moment was when he made a last stand before the Hornburg, a defensive maneuver. On the mechanical side, Hama's basically the representative for the side of that most of doesn't mention: as has a fair bit of direct damage in the forms of Mirkwood Runner, Poisoned Stakes, and Forest Patrol, can go for an attachment-swarm using the Signals, and can Voltron pretty well with Unexpected Courage, Arwen Undómiel, and Tale of Tinúviel, , the straightforward combat sphere, actually has a lot of tricksy events, like Wait no Longer or Bilbo's Plan. Hama is the hero for this archetype, going almost completely against the previously-established grain of "play allies and Weapons to hit stupidly-high ." Instead, Hama focuses on making sure that you have a constant supply of those tricksy events, basically acting as a toolbox to store all those different events in. Effectively, his textbox reads, "Response: After declaring Hama as an attacker, swap a event in your discard pile with a card in your hand."

Of course, written like that, that does mean that you can swap Feint for Elven-light an infinite number of times assuming you have a hero, so FFG decided to errata it to "Limit 3 times per game [We really mean that]." The flaw with this is that it creates more problems than it solves:

What really annoys me about the errata, though, even more than how it basically forces players who follow the errata to use Hama in the very way the errata was supposed to counteract, is actually a pair of cards: Zoey's Amulet from the Arkham Horror Card Game and The Annals of Castle Black from the Game of Thrones LCG. Both of these cards are based around recurring events from your discard pile, just like Hama, and they both do it much, much better than either pre- or post-errata Hama. Zoey's Amulet moves the event to the bottom of your deck while The Annals of Castle Black flat-out removes it from the game. While I'm not a fan of how they both affect any event you play, I am a huge fan of how they prevent infinite recursion like the infamous Hama-lock. If the "Limit 3 times per game" errata were replaced with "At the end of the phase, move that event to the bottom of your deck," I would be as ecstatic as the Rohirrim were when Erkenbrand arrived.

As it is, though, I really don't think that Hama's worth the hero slot. His ability is highly limited and downright boring if you try to squeeze the maximum efficiency you can out of it (typically by recurring the likes of Feint or Foe-hammer), and once its 3 charges are expended you're left with a worse Legolas. If you want to use Hama, my personal advice is just to ignore the errata or replace it, either with some other method of preventing infinite recursion or "This ability can't target Feint or Thicket of Spears."

AlasForCeleborn 525
How about &quot;After Háma is declared as an attacker you may discard a card from your hand to place tactics event from your discard pile under Hama. You may play the cards under Hama as if they where in your hand. Whenever you play a card under Hama put it in the victory display instead of your discard pile.&quot; — Valyrian 1 5/4/22