Action: Ready a defending Gondor character. That character gets +1 until the end of the phase.

...seven walls of stone so strong and old that it seemed to have been not builded by carven by giants out of the bones of the earth. The Return of the King
Matt Smith 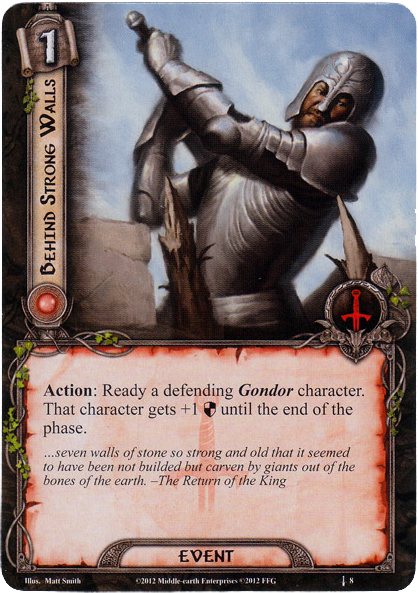 This card most obvious target might be our friend Beregond (or Beregond), but in general there are so many possible good targets, especially across the table in a Fellowship with lots of Gondor heroes/allies (Boromir, Denethor and Denethor, Defender of Rammas, Knight of the White Tower and so on)) that I always find a good use for it.

I find this card absolutely great. Just 1 resource to defend a second attack with the stat boost for both attacks. You can even save it until after the shadow effect has resolved if you're hoping to hold it but need to save someone at the last second. Been having great success with this in my combat Gondor deck.

frozen 122
Why &quot;boost for both attacks&quot;? Action window for defending enemy attack is available AFTER enemy attacked. — Fat1s 1 2/7/22
@Fat1s That is incorrect. There are several action windows during the resolution of enemy attacks. This card can be played in any of them, most usefully right after shadow effects are revealed and resolved (Step 6.4.2, p. 22 of the online rules reference)) — kjeld 388 2/7/22
I have not been aware about this rules reference. Now, it is clear. Thanks! — Fat1s 1 2/8/22