Spear of the Citadel

Response: After attached character is declared as a defender, deal 1 damage to the attacking enemy. 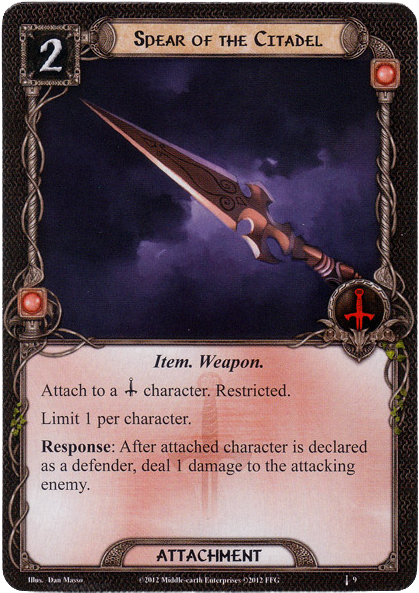 I really like this card, and I think it is quite good. When tactics Beregond and this card first came out I played them all the time. My goal was to always have a Gondorian Shield and a Spear of the Citadel on Beregond. In my opinion that is the best combination of restricted attachments to play on tactics Beregond.

The best thing about this card is that if you are defending against an enemy with only 1 hitpoint left, you kill him before he deals damage or reveals his shadow card. And even if you don't kill the enemy it just makes it that much easier to kill during the attack phase. And what's more, if you can't kill the enemy during the attack phase you can just continue to block the same enemy until he dies from the spear.

There is no doubt the spear has good qualities. It allows you to kill enemies without ever attacking them. It pairs great with Gondorian Shield, and direct damage cards. But what are the down sides of playing this card?

Well first off, it has to be played on a tactics character. There are only about 5 decent tactics defenders and Beregond is by far the best. Your other options are going to be Tom Cotton, Boromir, Dori, and Gimli. With the exception of Tom, each of the other options only have 2 defense. And while Tom does have 3 defense, he has the lowest amount of hitpoints in the group. The spear would certainly work with any of these other hero options, but the problem becomes the number of attachment cards required to make the hero a solid defender.

The spear can be attached to an ally character, but I've never liked using attachments on allies because they are far more fragile. Even if you do choose to attach it to an ally you've only got about a 6 decent options: Beorn, Defender of Rammus, Déorwine, Boromir, Gondorian Spearman, and Longbeard Sentry.

In conclusion, my opinion is that Spear of the Citadel is a great card for Beregond. Outside of Beregond it has limited, if any use.