Response: After Beregond defends an attack and takes no damage, reduce the defending player's threat by 1. (Limit once per round.)

"The Lord does not permit those who wear the black and silver to leave their post for any cause..."
The Return of the King
Adam Lane 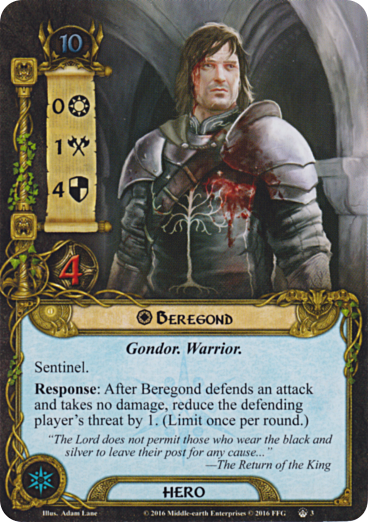 Since we can all agree a four defense, 4 HP hero is an awesome defender, my main goal here is to determine whether or not sBeregond is objectively better than his Tactics incarnation.

Keywords - They both have sentinel, so that's a wash.

Picture - Tactics Beregond has an amazing picture, by Magali Villeneuve, which shows him standing in front of some pillars (presumably in Minas Tirith) preparing for battle. Spirit Beregond also has a great picture. The man is bleeding! Badly! One other item worthy of note is that in the two pictures, his shoulder guard is on different sides.

Ability - Tactics Beregond gives a minus 2 discount on all weapon and armor attachments played on him. And there are many in-sphere toys: Gondorian Shield, Raiment of War, Citadel Plate, Spear of the Citadel, and Raven-winged Helm, just to name a few. Spirit Beregond's ability is less geared toward protecting him, but instead the players. He can, if he doesn't take damage in an attack, reduce the threat of whatever player he just defended for by one. In-sphere cards for him include Blood of Númenor, Unexpected Courage, and Desperate Defense. Not to mention, shadow cancellation like Hasty Stroke and Tides of Fate are also spirit.

What are your thoughts? Which of the defenders of the Citadel is more worthy of our praise?

bobbymcbobface 600
Is sBeregond's ability once per round referring to the group or player? — Quetzal513 72 4/7/20
It is once per round while Beregond is controlled by one player. For example, if Beregond defends an enemy engaged with another player, lowers their threat, and then readies somehow and defends an enemy engaged with the player who controls him, he cannot also lower that players threat. But is the controlling player were to play Desperate Alliance, Beregond's ability would apply once for the player he is sent to as well. — bobbymcbobface 600 4/7/20
My vote goes definitely to TaBeregond since his discount can be key in the first rounds in a sphere with little resource generation (also I enyoy mono-sphere decks so a full Tactics ranged/sentinel combat deck is where it truly shines).. But with the new Helm of Secrecy event from Under the Ash Mountains you can have the best of both words, keeping around TaBeregond to enjoy his discount at the start of the game and them pulling his Spirit doppelganger for mid-late game to keep your threat stable. — Alonewolf87 1586 4/7/20
Wow! That's a great point! Helm of Secrecy allows you to switch all attachments as well right? — bobbymcbobface 600 4/7/20
Yes, you keep all eligible attachments (and damage tokens) — Alonewolf87 1586 4/8/20
I certainly find blue Beregond sees more play in our games, probably because i) unless we're fighting a huge enemy, all Beregond really needs is a Gondorian Shield, so the discount is not that exciting to me, and ii) I tend to value spirit resources above tactics resources. But against a quest with a huge enemy, red Beregond will probably be the winner since you'll want to boost him up more and the threat reduction is less likely to resolve against a dragon or balrog or whatever. — NathanH 7 4/19/20
With Thorongil Beregond can be s and t — Truck 1202 12/4/20
That's not his blood — MarvelsTold 3 3/13/22