Action: Return a Silvan ally you control to your hand to choose a player. Deal 1 damage to each enemy engaged with that player.

The marauding orcs had been waylaid and almost all destroyed; the remnant had fled westward towards the mountains, and were being pursued. The Fellowship of the Ring
Cristi Balanescu 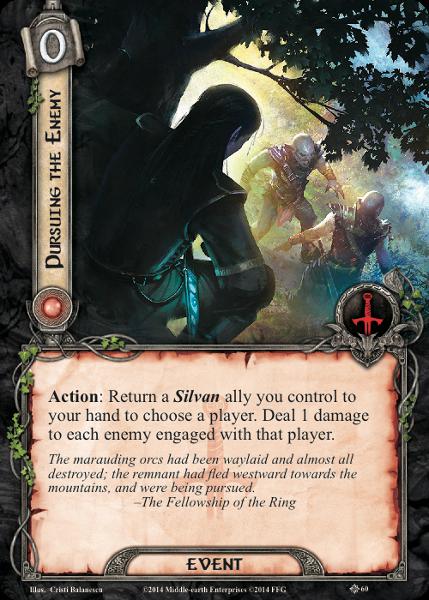 It was a pleasure to use this card during the Morgul Vale quest...

"It was there, on the White Bridge of Minas Morgul where the company of courageous heroes was pursuing the foul enemy of the free peoples of Middle-earth. And with the help of a couple of ... Galadriel's handmaidens ... the final blow to the wretched ghost was dealt."

This card is kind of under-rated. It's reasonable enough to say it is perhaps the least useful of the four Silvan events, but it is still useful. The simplest point to note is that in a Silvan deck, with the benefits of Celeborn, perhaps Galadriel, and the enters play effect of whichever Silvan you're using, returning a Silvan ally to hand is in some ways a reward in itself. At the very least, it's not really a downside, and the event is otherwise free.

Now to the actual effect. You're not going to get the ideal result particularly often, where one player has a bunch of enemies engaged which will all take damage. The question though is how much of a problem that really is. Even if you're only damaging one enemy, those points of damage add up, especially if there are other sources of direct damage around such as the obvious pairing in Galadhon Archer. Sometimes you'll find yourself just one point of short of killing something. Sometimes enemies have low hit points. With additional direct damage around there's potential for this to play a part in actually killing an enemy before it can make an attack, which is a massive deal. I mean, just cancelling an attack is the effect of another, much more popular Silvan event. That this will deal damage to additional enemies if you're engaged with more than one is just a nice little bonus.

Overall, this is a nice bit of direct damage to supplement other direct damage or just regular attack power while fueling the Silvan ally cycle. If you're tri-sphere or even quad-sphere then depending on the nature of the deck this might be the event to leave out, but when you're building on the basis of the Silvan ally-bouncing strategy you should definitely consider this if you have access to .