As an additional cost to play Skyward Volley, exhaust a ranged character you control.

Combat Action: Deal 2 damage to an enemy engaged with a player. Resolve that effect again for each copy of Skyward Volley currently in your discard pile (you may choose different targets). 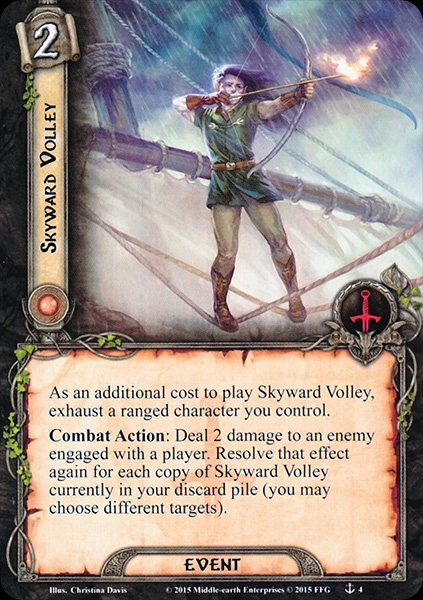 First off, the bad news; at 2 cost, Skyward Volley's expensive for an event, and the forced exhaust only adds to that. It incentivizes running 3 copies in the sphere with the second-worst card draw after , and practically necessitates enough card draw to see at least the second copy (2 cost and exhausting a ranged character for 2 damage isn't a good deal). It's a Combat Action, so you can't use it to get around archery. It requires you or someone else to be engaged with the enemy you want to hit, so you can't blow up the Hummerhorns without dealing with its Forced effect. It can't hit enemies who are immune to non-combat damage or player card effects in general. It's typically superfluous, as most ranged characters typically have enough attack to at least help you deal with the majority of enemies.

Honestly, that last point really hits the nail that is Skyward Volley on the head; it's superfluous and over the top, and you'd be better served putting more dependable, restrained cards like Veteran Axehand in your deck.

On the other hand, the LCG is a game, and games are about fun, and there's something to be said for stopping an enemy attack, not by playing the ever-dependable Feint or even by playing Quick Strike to melt something with the Gimli flamethrower, but by shooting the enemy in the face with a volley (or multiple, if needed,) of arrows. There's just something kind of fulfilling about exhausting a ranged character to deal direct damage, and the visual of a volley of arrows sinking a ship (like Sahir's Escort, may the Seas crush it) is amusing.