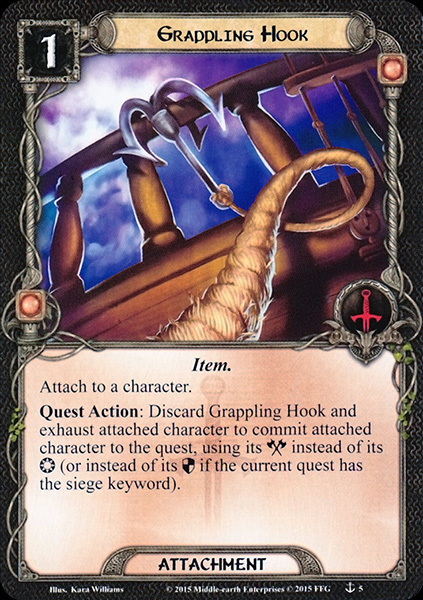 To be blunt, Grappling Hook is not a good card if you want to reliably quest; it's a one-use attachment, in the sphere with the worst attachment recursion ( has Erebor Hammersmith, has Second Breakfast, and has Dwarven Tomb; even has better recursion, thanks to The White Council.)

But, if you don't use it to reliably quest, but more like Secret Paths or Radagast's Cunning, as a break-glass-in-case-of-emergency boost, that's when it shows its quality. Attach it to Marksman of Lórien or Legolas, and you've got an emergency 3 "" character you can use to boost your questing a bit. More importantly, you can use it after staging. The flexibility here is incredible; you attach this to, like I said, Legolas, and you can quest for 3 with him in an emergency-or you can hold onto it, and use him in combat. This is where Grappling Hook really starts to shine; it allows you to quest lighter than you usually would, but still have peace of mind that you won't fail questing, at least not horribly. For instance, everyone knows that you beat Conflict at the Carrock by turtling until you're ready to kill the trolls, which means controlling your questing is key. But Conflict includes Wilderlands, which means you could be dealing with a random Brown Lands that completely messes up your questing calculations. So you have to quest for enough, but not too much. Or, you could be looking to clear a lot of enemies out of the staging area, and want to hold, say, Círdan the Shipwright back from the quest so that he can use Narya come the combat phase (assume he can't do both because Unexpected Courage is playing hide-and-seek with you, lurking near the bottom of your deck alongside Steward of Gondor.) So that's 4 you want to hold back, at least-but you also don't want to fail questing, so that you raise your Threat as little as possible. What do you do in these situations? Quest lightly, and have a character with Grappling Hook. You can hold them back for combat if the staging area stays manageable, but if too much comes up, just exhaust them and discard Grappling Hook to mitigate that. The ability to commit to the quest after staging is rare and understated, but simply incredible; it allows you to easily control your questing, and dodge all those annoying "...each character committed to the quest..." effects.

So, as a safety valve to help prevent you from underquesting, Grappling Hook is good-but a game is seldom won by sitting Behind Strong Walls. Grappling Hook can help minimize, or even prevent, a Threat raise due to failed questing, but what about placing progress by questing successfully? That requires a bit more specialization, but is still quite manageable.

Something quite nice about Grappling Hook is that, since it uses the character's instead of their , any boosts to their get carried over to their when you use Grappling Hook. This means that Grappling Hook can hit some pretty incredible numbers for questing, though it does require some deckbuilding. For instance; Gimli equipped with a Grappling Hook is downright monstrous; at base, he can quest for 2, which is solid-but that only goes up. Maxed out on damage, Grappling Hook causes you to quest for 6-2 more than the famous Éowyn. With a Citadel Plate and 4 more damage, you quest for 2.5 TIMES the Lady of Rohan's output. Add another Citadel Plate, expensive as that may be, and 4 more damage, and you're questing for more than the 3 highest heroes in the game, COMBINED. Vigilant Guard adds 2 more , and a safer way to get that damage on Gimli. If you're after cheaper boosts, Gimli's a Dwarf, making him eligible for Dwarrowdelf Axe-and Khazâd! Khazâd!, allowing you to spend 0 for +3 . Another Dwarf who's an interesting target for Grappling Hook is Erebor Battle Master; he's still eligible for Khazâd! Khazâd! and Dwarrowdelf Axe, as well as having an innate attack boost that's arguably easier to activate than Gimli's. This is just the tip of the iceberg; not only has several characters with good , it also has quite a few who can reach mountainously high ; Grappling Hook allows you to turn these boss-killers into quest-killers. Éowyn, Éomer, Eagles of the Misty Mountains, Beorn, Booming Ent, Fornost Bowman... and that's just the characters who can hit levels that stupefy one to see. Gondorian Fire, Elven Spear, and even Keeping Count could be useful if you want to go all-in on boosts.

Overall, Grappling Hook does not allow to quest; it allows to help quest, either by minimizing the amount the quest is lost by or placing so much progress on it in a quest push that it makes the Outlands player's head spin. If you want the latter, it may take some specialization, but even without it, an additional 2 or 3 is very nice to see, even for one turn. The best thing about Grappling Hook is it does what Trained for War does; it allows one character to turn their martial strength to questing strength, and the role switch, I feel, is more easily stomached by one character than multiple. I didn't even touch on its ability to allow you to dodge Siege, partially because I haven't played any quests with it. Overall, while Grappling Hook by no means is an auto-include for decks, one which focuses on turning one character into a boss-killer might want to take a look at this as a way to use their when their foes lie dead about them. If you're looking for things to fill your last few deck slots in a deck with plenty of concentrated in a few characters and access to , you could do worse than throwing this in; at the very least, the thematic feel of throwing a grappling hook 'cross the battlefield and pulling yourself along with it while, hopefully, raining progress is quite fun. This is not to say that this card is thematic at the expense of power; like Keeping Count once you draw your second copy, it feels thematic, but is still a force to be reckoned with if you use it right. Put this in a deck with a strong boss-killer, or even one with even a few of 3 characters, and I have a feeling that you'll have a pleasant surprise one quest phase.

AlasForCeleborn 525
You could also just include a copy for a one round YOLO quest with a big hero just for fun. — Wandalf the Gizzard 1989 8/16/18
The last word of your comment aptly describes the best thing about Grappling Hook; whatever its power level, it's a boatload of fun to use. — AlasForCeleborn 525 8/16/18
To true! — Wandalf the Gizzard 1989 8/17/18
With Gimli, Citadel Plates, and Well Equipped, I was questing in massive bursts of 12+ willpower from a single hero via this card — LEGOlas 107 3/25/22
Also, tactics now has card recursion with Nori! So there are ways to abuse Grappling Hook, I am sure. — kjeld 462 3/25/22
This card was instrumental in letting me defeat the Raid on the Grey havens using a beefy Gimili — NERD 567 5/13/22
It also synergizes with some of the leadership Noldor cards, though Cram is better. — NERD 567 10/5/22