"I don't need your service, thank you...but I expect you need mine." The Hobbit
Tiziano Baracchi 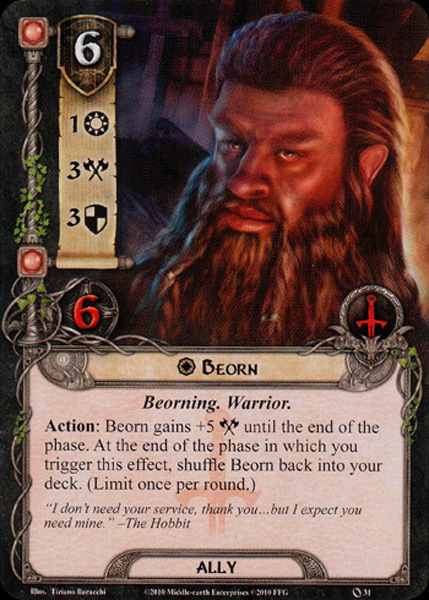 I feel that Beorn is somewhat under-rated as an ally. The cost of 6 is admittedly somewhat prohibitive, but the standard rule of thumb for allies is that their cost should be about half the sum of their stats - Beorn has 13 stat points for a cost of 6, so he's absolutely good value there. Affording 6 resources for an ally is difficult, but he's worth the cost if you do have them. And then there's his ability, which if you've brought him in permanently you do want to be cautious about using, since he'll be shuffled back into your deck after you use it, but it tends to be particularly useful as a boss-killer, and once the boss is dead you have less need of your very strong combat ally. And it is potentially handy that he's shuffled back into your deck rather than discarded, so you do have more options for actually getting him back into play again if you want to. One particular possibility is that you could use him to soak up 5 damage before triggering his ability to shuffle him back into your dec so you can subsequently bring him back with full hit points. The question then is how you can actually bring him in in the first place.

Firstly, paying for him. As I said, he's worth the 6 resources if you have them, so Mablung could be a simple route, Proud Hunters is a great option as well, or simply putting Steward of Gondor on a hero, and I've often thrown him speculatively into a mono- deck (especially since a lot of the more standard cards tend to be cheap so I figure I may well save up some resources). Hirgon offers a consistent means of getting him in for only 5 resources, and all the above resource generating effects would apply once again.

Secondly, cheating him in. Obviously you could try to get him in with A Very Good Tale though in that case your chances aren't great of having exhausted enough value to bring in a second ally along with him - alternatively if your AVGT brings in a Soldier of Dol Amroth then you could play Beorn cheaper. Alternatively, there's always Elf-stone or Send for Aid to bring in the big bear for only 1 resource by questing. Finally there's Vilya, a great option which also lets you get great use out of Beorn's ability, since every time you trigger it he's shuffled back into your deck thence to be Vilya'd again. You can even keep doing it when your deck has run out, by triggering Beorn's ability in the Combat phase, shuffling him back into your empty deck, and then exhausting Elrond and Vilya in the Refresh phase to put him back into play before you draw him in the subsequent Resource phase.

Third and finally, there's the possibility of just bringing him in temporarily. Sneak Attack, Reinforcements and Prince Imrahil (they share the Warrior trait) can all let you bring in Beorn for a Combat phase to either take a big hit or make one, triggering his ability since he was only going to be in play for the one phase anyway. In the cases of Sneak Attack and Reinforcements note that since his own ability shuffling him back into your deck and the events returning him to hand would trigger at the same time, meaning you can choose which order to resolve them - and obviously if you return him to hand first he is no longer in play to be shuffled back into your deck so you just hold onto him to do the same thing again another time.

The one other thing to consider is once he's in play, what works well with him? Obviously, with that versatile statline he could benefit from readying to defend and attack, or do oen or the other multiple times, so any ally readying effects work well, most notably Narya. An alternative means of at least using his hit point pool while having him primarily act as an attacker would be to give him Defender of the West - 6 hit points is enough to safely take undefended attacks from most enemies. You could even boost his hit points further with an Ent Draught, or Vigilant Guard, not to mention Raiment of War which would improve his and as well. I personally wouldn't recommend this for the more expensive options as if you ever trigger his ability he would then be shuffled back into your deck and the attachments would be discarded, but the 1-cost Defender of the West or Ent Draught could be reasonable choices. A weird point to note is that since the phrasing says "shuffle Beorn back into your deck", if he is under someone else's control due to Defender of the West (or equally Reinforcements if you choose to resolve his shuffle into deck before Reinforcements' return to hand) he would be shuffled into the deck of whoever controls him at the time rather than his owner's deck. So you may want to be careful about that.

If you can get him into play, whether by paying for him normally or through some other means, Beorn is an incredibly powerful combat ally, capable of soaking up large amounts of damage and utterly destroying your enemies, so if you want to make use of him, you don't need to be put off by the high cost - there are ways round it, and even without them he's worth it anyway.

Warden of Arnor 5061
I dunno, my metric for a good ally is more like &quot;primary stat &gt;= cost,&quot; leaving some room for extra HP and abilities. He's a great target for Sneak Attack or Vilya, but I'd never include him with the intention of actually playing him normally. — NoSoup4you 736 6/25/17
That should read, primary stat greater than or equal to cost. Can't even edit, thanks RingsDB. — NoSoup4you 736 6/25/17
3

It's always good to have Beorn by your side and that's also the reason, why I put him even into decks without sphere. If it's not the Sneak Attack combo, there is still Stand and Fight which can bring him there. His stats are great and his ability helps me to feel much better during fights with nazgul, when he's on the table. The Artwork is really meeh...why, but still. Verdict: 5/5.

Beorn is the BOMB. I don't care what you say about his art, 3, 3, and 6 is to good to pass up. Sure, he's expensive, but with that ability, who cares? Sneak attack, Imrahil, and Hirgon all just give the old guy new life.