Draw 1 additional card at the beginning of the resource phase.

Forced: After drawing cards at the beginning of the resource phase, choose and discard 1 of those cards.

Very tall he was, and his beard was long, and he was grey and old, save that his eyes were keen as stars...
The Return of the King
Aleksander Karcz 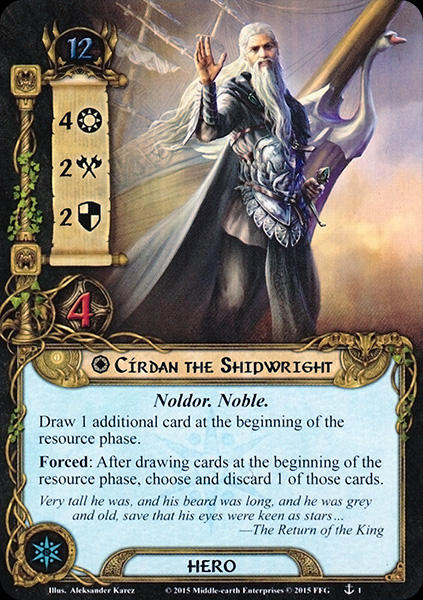 Cirdan the Shipwright is an amazing hero; sure, his starting threat's high, but he's worth it.

First, ignoring the text box, those stats are quite good. He ties Eowyn and Galadriel for , but has more than the lady of Rohan and doesn't require his ring like the lady of Lorien. More importantly, with readying and quite a few other cards, his other stats aren't wasted. If you have Elfhelm in play and manage to get Narya and Unexpected Courage or some other form of quest readying on him, Armored Destrier turns him into a serviceable defender (my brother also realized that Silver Lamp plus those other attachments could work; find out which enemy doesn't have the bad shadow, defend it, Destrier the other(s).) However, that's a lot of work to get use out of 2 base ; it's not necessarily good, especially with a larger card pool, but for people just starting out, it works surprisingly well. Just with his base stats, 4 is still as good as it was in the Core Set, 2 and 2 means he's not totally helpless come combat, even without turning him into Voltron, and 4 makes him a sturdy pinch-defender, as well as a good damage soak.

Then we reach his text box; effectively, you forgo drawing a card at the start of the turn-in exchange for playing a copy of Daeron's Runes. It is as good as it sounds. Sure, you have to discard a card from hand, but if you have Silver Harp it's not a problem, if you have Elven-light it's actually a plus, and the rest of the time you can probably find something you're willing to toss. Sure, there can be those painful "Steward of Gondor, Unexpected Courage, or Narya?" moments, but those are surprisingly few and far between. The rest of the time, you draw two, pitch a card from your hand, and smile as you draw your crucial cards two times faster.

Another awesome thing about Cirdan's ability is it actually allows you to fairly well play a > 50 card deck. With a regular hero lineup (excluding Erestor,) you draw through your deck in 43 turns, maybe less if you have card draw effects. With Cirdan, you draw through a 50 card deck in 23 turns. He cuts the amount of turns it takes to burn through your deck (and, logically, the amount of turns it takes you to find the 3 copies of Steward of Gondor on the bottom of your deck,) almost in half. With a 60 card deck, 3 regular heroes takes you 53 turns to draw through; Cirdan slashes that to 28, less than the time it takes a standard 50 card deck to draw through itself. It's only when you start getting into the high 60s that you start having consistency issues, I've found. It is as nuts as it sounds.

And that's not counting his ring; sure, you need readying to get use out of it and his , but that's a small cost for two ally readies, especially because ally readying has the potential to be even more ridiculous than hero readying. Sure, hero readying can make Beregond defend for 6 multiple times, or Gimli vaporize multiple enemies-but you don't always need that can be expressed as a cube, or that has multiple digits; sometimes, good ol' fashioned 6 and 4 will suffice. However, ally readying provides other things than strong stats; as I said in my review for the ring itself, you can ready 's support allies to use them again, boost Warden of Helm's Deep to a very nice 4 , use Beorn's ability and ready him to downright murder two enemies, and, most importantly, never, except in situations where you're either A. doing horrible or B. the encounter deck pulled off a combo that shouldn't exist, even with A Test of Will in the card pool, lose questing again, because some genius thought Faramir shouldn't have a frequency limit.

Overall, even without his ring, Cirdan the Shipwright is an amazing hero, one who I would personally say, while nowhere near as splashable as Galadriel or Glorfindel, can still work well in more decks than you'd expect. He has strong stats which you can either work to use well or just ignore and focus on his , a fantastic ability, and the potential to dramatically up the power of your deck's allies with two attachments (the deck slots they take up not being as big an issue as you'd fear because of his card draw.) While he won't work in every deck, unlike 's other three Noldor heroes, the Shipwright of the Grey Havens is no weakling; he does have hindrances, (his high Threat, chiefly,) but those are the parts of the oyster shell around this pearl of the sea. Men of Harad, long-limbed Ent, grey-eyed knight of Dol Amroth, and many others besides would cheer to see this Shipwright among their captains, with his will leading the way, his deep knowledge honing them, and the Ring of Fire upon his finger redoubling the courage in their hearts. Be careful with who you give Narya to, as Cirdan wisely gave it to Olorin, and you will find your strength trebled as Mithrandir and his allies did.

And the art is quite good, too; that beard is a work of beauty that even the Sons of Durin would appreciate.

AlasForCeleborn 509
Cirdan's ability is fantastic, but just to clarify, it's not &quot;draw 2 cards and discard any 1 card from your hand,&quot; which your review suggests a couple of times. Instead, it's &quot;draw 2 cards, then discard one of those 2 cards.&quot; Much more limited but still fantastic for accelerating through your deck. It begs for deck scrying like Imladris Stargazer (which is nicely in-trait and in-sphere for him). — GrandSpleen 1317 8/13/18
Welp, I've been using Cirdan wrong. Still great, though. — AlasForCeleborn 509 8/14/18
And he can get Light of Valinnor — Truck 1228 3/5/21