They now learned to their joy that Erkenbrand had left many men to hold Helm's Gate, and more had since escaped thither. The Two Towers
Jarreau Wimberly 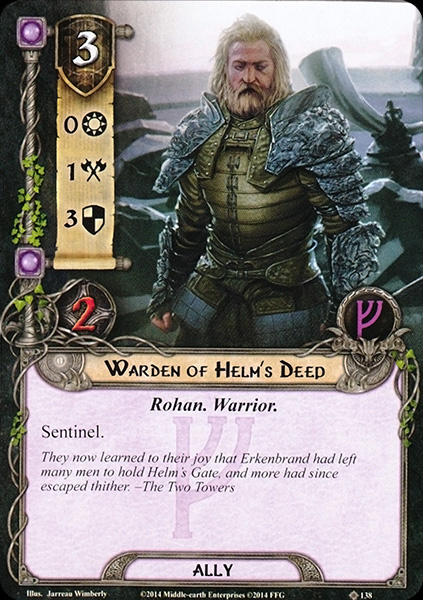 This guy has had a problematic time earning the community's acceptance. It's understandable, but I do think he's kind of under-rated. The problems with this card lie entirely in the comparison to the much more popular Defender of Rammas, and as such that's also probably the best way to review him. So what are the differences? Warden of Helm's Deep has one less , one more hit point, a Sentinel keyword, costs one more resource, and is in the sphere rather than .

Obvious point first, 3-cost instead of 2 is a big issue. I could trot out the tired old "Cost is less significant in " argument, but that's more significant if the card in question is clearly worth the resources you're paying but it might be hard to get those resources without help. So what we have to consider is whether the Warden of Helm's Deep is in fact worth the 3 resources he costs. It should of course be noted that if you use Théoden then this guy only costs 2 as the first ally in a round, and given Rohan can also be a bit weak on defence, that's certainly a place where this ally fits in very well. Whether he fits in other contexts where you have to pay full price is more in question however.

3 /2 versus 4 / 1 is an interesting debate to consider. As far as considering what single attacks each ally can survive they're obviously equivalent, but with multiple attacks for 4 the Warden will require healing to maintain that durability. On the other hand 3 is still very good for an ally, enough to block the average enemy without concerns, while that extra hit point could soak up a point of archery or other direct damage, or in some quests could of course save you from a nasty undefended when you get that dreaded "Deal 1 damage to the defending character" shadow effect. Especially with healing becoming more of an assumption and a necessity in some recent quests rather than the simple option it started out as, the argument could be made in favour of the Warden over the Defender, but it's pretty close.

The big deal here is that Sentinel keyword (in multiplayer). Of course arguing that simply being a Sentinel is worth an extra resource is a difficult case to make, it brings back thoughts of those old punching bags the Silverlode Archer and Horseback Archer who followed a similar principle with Ranged. I would argue in mitigation though that Sentinel on a good defender is more significant. Partly this is because strong defenders are rarer than strong attackers, so being able to throw defences across the table may be more significant than throwing attack around; and partly it's because Sentinel is less common than Ranged - a search for allies with Sentinel turns up 16 results (plus 3 who can gain Sentinel under certain conditions). Of those 16, only 3 innately have 3+ , of which one is the Warden; one is Déorwine, who is unique; and one is the Winged Guardian, who either costs extra or is temporary. The Longbeard Sentry is good if you're OK to keep discarding from your deck, or Derndingle Warrior if you have healing available (though of course having healing also makes the Warden good, as noted above), and of course Guardian of Arnor is amazing if you have some enemies engaged, but the point is strong Sentinel defenders are not that common a resource. I will note here that in fact Ranged attackers are less common than Sentinel defenders, but most of those Sentinels aren't particularly strong defenders, and the strength is more significant on defence since (generally) can't be pooled.

In the end, while there are some mitigating factors, the Warden of Helm's Deep probably isn't as good value for resources as the Defender of Rammas. I wish he had an ability, even if it was something really minor, just something to set him apart, or failing that, just giving him 2 rather than 1 would be something. But on the other hand it could be argued that the Defender's incredible value for resources is unbalanced in the first place while the Warden is on a more reasonable level. As such I'd say that a deck looking for a decent ally defender should at least consider him, and in particular for such a deck which is also using Théoden he's a great choice.

Warden of Arnor 4527
I'd have to agree with this assessment. The encounter deck (direct damage) or a player's own access to the Le spheremay be the ultimate factors to consider when deciding between the Warden and Defender. I do think the best way to play him is with S Theoden. Plus, also in sphere is Hauberk of Mail and Ancestral Armor. Now, you could also play those of the Defender of Rammas but that is dependent on your sphere access. Getting the Warden for two and then strapping him up with the aforementioned armor choices can really turn him into a defending powerhouse. Even without these attachments I think the &quot;safer&quot; option. Not to mention cost efficient with Theoden. — Uruk-guy 214 12/31/20