"We have been keeping watch on the rivers, ever since we saw a great troop of Orcs going north towards Moria, along the skirts of the mountains, many days ago."
Haldir of Lórien, The Fellowship of the Ring
A. M. Sartor 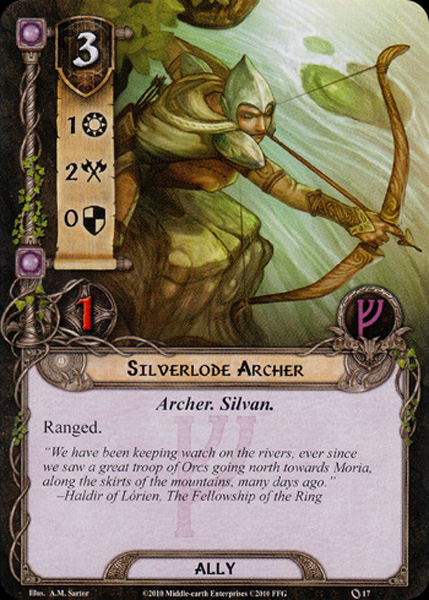 Silverlode archer is an archetype of ranged ally, you will not use it much in solo game, beside very specific scenarios, which require ranged characters, but in fellowship and multiplayer he is quite useful. There were two archetype ranged allies in the core set, this one and Horseback Archer, where silvan had little bit harder position, since there was not much synergy or support for building a silvan deck in the early days of the game. Even so, 2 ranged and one are quite good for start. Since class have no problem with extra resources, is quite easy to put him in play. Worst thing about him is, that he has only 1 hp and so you can't even combo it with Silvan Tracker. So from this point of view I can't go higher with rating then average. The artwork is very interesting and reminds me some comicbooks of Fables. Verdict: 3/5.

The Silverlode archer has recently been supplanted by the much more efficient greenwood archer. However, in a Silvan deck, this guy becomes playable, if not good. Ranged is always nice, and there are only 4 ranged allies in the game, one of which is almost as bad as this one. He can also contribute to the quest if need be.