...he saw not a shadow, nor a blur, but the small figures of horsemen, many horsemen, and the glint of morning on the tips of their spears was like the twinkle of minute stars beyond the edge of mortal sight.
The Two Towers
David Horne 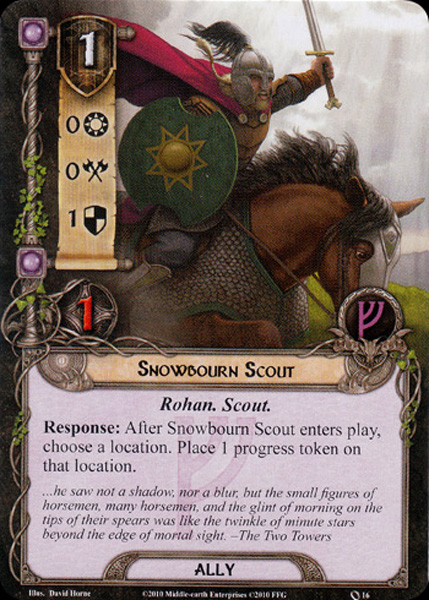 One of my favourite cards from the Core Set. Pretty easy to explain why as well. The erstwhile Snowbourn Scout was for a long time the archetypal chump blocker, and sometimes you just need a wimpy ally to lay down their life for the cause. As the card pool has expanded and we've gotten more and better defensive options, that need for chumps has lessened, but even now good old Snowbourn can be hard to leave out. People tend to focus more on strong defenders now but sometimes plans go out the window and it's nice to still have something expendable to fall back on.

Beyond that, the only significant question is why the Snowbourn Scout was and sometimes arguably still is the best chump in the game? Well, first off, he costs 1. There are a grand total of 13 allies in the game at this point which cost 1. Two of them have that frustrating text "Cannot attack or defend" so they can't be chumps. So options are limited for really cheap chumps. On top of that, the Snowbourn Scout places a point of progress when he enters play, so he still serves a purpose even if he doesn't have to die. A purpose that can fit usefully into any deck that can play him, unlike some of the others who may be more specific. And because his ability is an enters play and his only stat point is 1 /1 you're not losing anything by getting him killed, unlike, say Henamarth Riversong.

Honestly, the only option to really compete with the Snowbourn Scout for the position of a dedicated chump flexible enough to fit into any deck that can play him is the Squire of the Citadel. But even there, while a lot of people would consider the Squire to have supplanted the Scout, I still prefer the Scout's point of progress to the Squire's extra resource. For one thing, the resource can only go to Gondor heroes, and you don't always have one. Granted, Steward is in the same sphere and gives the trait to anyone, but then there's a question of the sequence you draw things, and also if you have Steward do you really need the 1 additional resource? Even if you do have natural Gondor heroes, again Steward may well give you all the resources you need, so often I'd prefer the progress. A final niche point is that in an emergency you could just Sneak Attack your Scout to clear a location in a hurry. Certainly not something you plan for, but an extra option. That little bit of location control should not be underestimated and is worth paying for in my opinion, especially in the rich sphere.

So here's to the Snowbourn Scout. May he rest in peace.

Snowbourn Scout is the best expendable chump in the game for me so far. Great price for what he can do. When I play sphere, I always put all copies of him to deck. He saved my games so many times, that I can't even count it. Artwork is also very well done. Verdict: 5/5.