Glorfindel can be played from your discard pile.

Action: Discard a card from your hand to ready Glorfindel. (Limit once per phase.)

"He is an Elf-lord of a house of princes."
Gandalf, The Fellowship of the Ring
Aleksander Karez

Flight of the Stormcaller #6. Spirit. 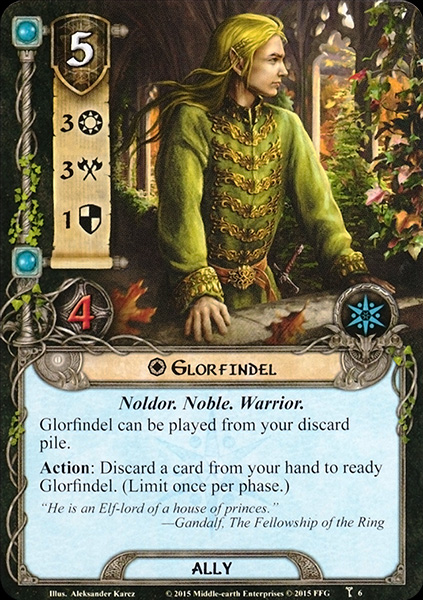 No reviews for the best ally in the game? This shall not stand!

Ally Glorfindel (titled so to differentiate him from the other Glorfindels) is a 5-cost unique ally, though you can reduce his cost using To the Sea, to the Sea! His text box also means that you can discard him to To the Sea, to the Sea! to reduce his own cost as you can play him from your discard pile. In exchange for that not-insignificant resource outlay, you get a 3/3/1/4 ally, making his stats just 1 fewer than his hero variants'. He also features built-in readying, with a cost that can be easily circumvented.

However, the heaviest cost of ally Glorfindel is his opportunity cost; by including him, you pass up Spirit Glorfindel the First as well as the potential to spend the 5 resources you needed to play him on other cards, such as Pelargir Shipwright or Knight of Belfalas. Is any card, even a 3/3/1/4 ally with built-in readying, worth passing up the cheapest hero in the game (in all meanings of the word) and the 2-3 other cards you could've played if you hadn't played ally Glorfindel?

Not necessarily, but those things aren't actually what make Glorfindel the best ally in the game. What does is actually that simple first line of text on his text box, "Glorfindel can be played from your discard pile." That simple line of text turns Glorfindel from a good ally (who might not be worth passing a great hero up for) into a game-breaking monstrosity. Suddenly, the sphere with the least healing or pseudo-healing options suddenly has the biggest pool of any sphere, because no matter how many times Glorfindel dies, if you can pay for him (and even a mono- deck will want to include some resource acceleration if it includes Glorfindel, so you stand a good chance of being able to pay for him) you can just keep bringing him back.

Combine these two parts of the card-the impressive statline and readying and the infinite recurability-and you have an ally that, if you can find a way to pay for him, is worth every penny. Glorfindel can quest for 3, take some damage during the quest phase, then either ready to counteract during the combat phase, ready to chump during the combat phase, or simply soak some archery. Typically, destroying a 5 cost ally is not a good move, but Glorfindel is no typical ally, and destroying him can actually be a boon in some situations, allowing you to put him back into play fully healed so that he can soak up archery again.

And all of this is assuming that you simply use Glorfindel as an overglorified sponge. He can do a lot more than that, from turning cards in your hand into extra characters committed to the various 'tests' that come up occasionally in quests (i.e.; Sailing tests from Dream-chaser and Escape tests from the Dead Marshes) to rocketing his stats even higher using cards like Raiment of War or Narya to become a monster in the combat phase. He even has value when he's in your hand, allowing you to confidently discard him without fear of losing something you might need later. And, of course, no review of a high-cost ally with built-in readying would be complete without mentioning A Very Good Tale.

Glorfindel may be expensive, but he is worth every penny. 3 is impressive even in , 3 is mind-boggling there, and 4 is impressive on an ally anywhere. His readying is fairly cheap and can even make other copies of himself that you draw useful. But it's the ability to play Glorfindel from your discard pile that seals the deal, at its worst allowing you to discard him to satisfy some cost or effect and not worry about having lost something you might need, at its best allowing you to laugh in the face of direct damage provided you have enough resource acceleration. If you manage to set Glorfindel up properly, you'll easily find the keyword he actually really, really deserves.

AlasForCeleborn 506
Just wanted to add that the &quot;may play from discard pile&quot; works well thematically too, as Glorfindel is said to have fallen while fighting a balrog in Gondolin, only to be send back to Middle-earth by the Valar. — Caedus 39 4/6/22
Also, he is cost is negligible with Caldare, not to mention he is great in big ally decks — NERD 466 10/20/22