Response: After Galadhrim Weaver enters play, shuffle the top card of your discard pile into your deck.

"You are indeed high in the favour of the Lady! For she herself and her maidens wove this..." Lórien Elf, The Fellowship of the Ring
Sara Betsy

The Treachery of Rhudaur #89. Spirit. 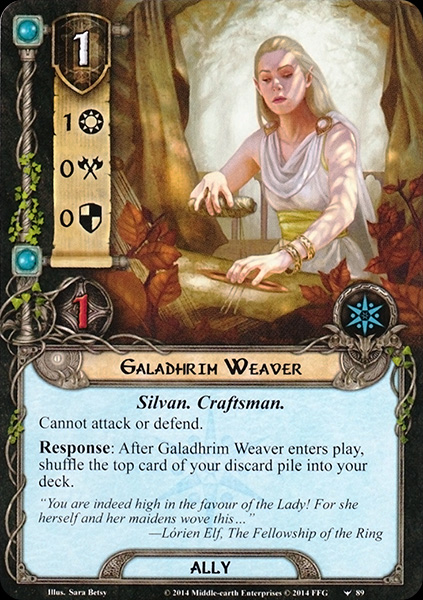 The first time I saw this card I was definitely not impressed. I had not encountered the Silvan archetype yet, and the card was released in the midst of a cycle that had very little to do with the woodland elves. On its own the card is essentially a willpower boost that also allows one to recycle a card from the discard pile into your deck. But while the Galadhrim Weavers may appear insignificant on their own away from their fellow Silvans, around their own people they can be quite an engine, quietly equipping an entire archetype to function at its smoothest.

First off, the rareness of the ability to reuse cards in the discard pile should not be taken lightly. Previously, The White Council was the primary option. However, it could be used at a max six times per game. In a silvan deck that functions primary off of events this is quite problematic. This would allow The Tree People and Feigned Voices, the two most important Silvan events to be played at most a collective total of nine times per game. However, the Weaver completely resets this situation.

Let’s say that one has the Weaver and Feigned Voices in hand. The weaver costs one resource to put into play. She can contribute her willpower during the questing phase. Then, in the combat phase, return her to hand to play Feigned Voices. Now next turn play the Weaver again to shuffle Feigned Voices into your deck. And rinse and repeat. As long as your deck has a good source of card draw, you should be able to repeat this every turn with one or another of the silvan events.

Now of course, any other silvan ally could be used as event fodder, getting their abilities as well. However, before Galion arrived on the scene, there was no Silvan ally that cost one or less, meaning it could be played from the hand every turn. The Galadrim Weaver ensured that there would always be a silvan ally to bring in and out of hand as the situation required. Although Galion is more efficient when seen as event fodder, the Weaver still is what allows one to continuously make use of the silvan events. In addition, with the arrival of The Elvenking, there is often opportunity to use more than one ally per turn. In short, the Galadhrim Weaver is what keeps the Silvan archetype from slowly faltering after the first few turns. Without this lowly card, one of the strongest archetypes could not be what it is today.