If unattached, attach Ranger Spikes to the next eligible enemy that enters the staging area. 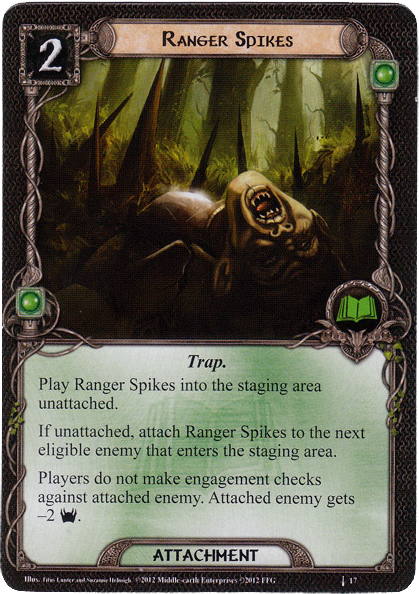 This is just a fantastic card. I wouldn't go so far as to say you should run 3 copies in every deck, but I will say that when I myself am building a deck with , I don't ask myself "Does Ranger Spikes fit in this deck?" I put in 3 copies right off the bat, then remove them later if I find myself short on space and it doesn't fit the idea of the deck. My default assumption is that they're in rather than out.

The reason for this attitude is simple: Ranger Spikes can quite simply negate an enemy. Now there are some situations where it doesn't work out so well, enemies with high archery values that you don't want to leave sitting around or enemies which have forced effects that make them engage you regardless; but in general an enemy which lands on Ranger Spikes will be stuck there as long as you care to leave it there. And, significantly, at -2 . That's the thing that makes this really worth it. If the enemy still contributed its then this card would only be worth for enemies you really wanted to avoid, but at -2 , a lot of enemies may as well cease to exist the moment they hit the Spikes.

According to a search on Hall of Beorn just now, there are 442 different enemies in the game, with obviously varying numbers of them in their respective encounter sets. Now of those 442, apparently 199 have more than 2 . So over half the different types of enemy in the game will contribute 0 on Ranger Spikes and you can freely ignore them for the rest of the game. And of course those enemies probably will be more numerous, so the actual proportion will be more in their favour. If we narrow it down to only non-unique enemies with >2, the number of results drops to 145. But then let's consider further - if a 3 enemy lands on the Spikes, that's still not too bad, it'll just be 1 extra for the rest of the game, that's nothing you can't handle. And the number of enemies with >3 is only 79 total, 47 of which are non-unique. So if we're OK in general with any enemy up to 3 landing on our Ranger Spikes, that's over 80% of the different types of enemy in the game, and the proportion likely goes up if one considers how many copies of each appear in encounter sets. Not to mention some of the bad targets will be unable to have attachments so they'll pass your trap by anyway and leave it still available for a future target. Those are odds I will happily take, and they're vindicated by my actual experiences of playing Ranger Spikes. The number of times I've regretted the Spikes because of which enemy landed on them I could probably still count on my fingers.

There's not a lot more to say. Ranger Spikes isn't really a complicated card that you use in weird combos, it's just simple and good. You throw it in your deck, throw it into the staging area, and most of the time it makes your game easier. I'll take 3, please.

Warden of Arnor 5219
It's really fun to use on those enemies that like to return to the staging area after they attack....whoops just backed into the spikes! — Mad Morderan 117 5/27/18
I'd be interested in a practical log of how often this works well vs not. I may keep one. I haven't tried this card yet, afraid of it whiffing too often into enemies that need to be dealt with, especially when playing a scenario blind. — dubcity566 30 8/4/20
3

This is the best trap card in the game. Easily worth consideration even outside a trap deck. Think of this as a perpetual Feint. As long as the trapped enemy doesn't have a high count or Archery, you can just leave it hanging out in the staging area and not think twice about it. Doesn't matter how the enemy is added to the staging area. It works on any non-immune enemy that enters the staging area. Thalin or other direct damage effects like Expecting Mischief that kill the revealed enemy do not trigger Ranger Spikes. If you can destroy the attached enemy, you can grab it back into your hand with Erebor Hammersmith. Like the idea of a free round in solo? Like the idea of playing 12 of these in 4-player and removing enemies from the equation altogether? Ranger Spikes is a 10 out of 10.