Play during the quest phase, before the staging step.

Action: Deal 2 damage to the first enemy revealed from the encounter deck this phase. 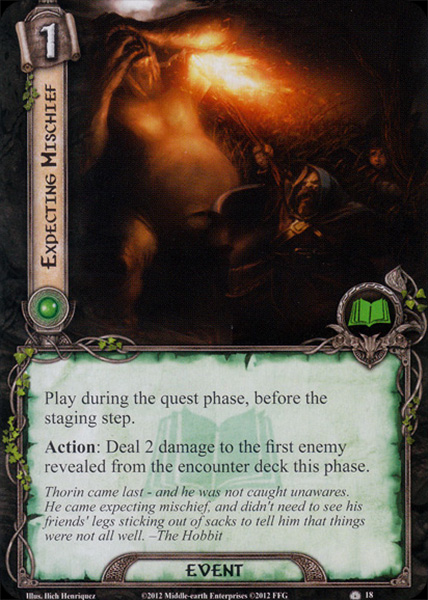 I've just started reading The Hobbit to my young son and was instantly reminded of this card when I read the relevant line from the book, which is the flavor text on this card. As a bonus, I retrieved this card and showed it to my son, which amazed him -- both because of the artwork (including Bilbo cowering in the background) and that it gave my son an idea of how well the book is known. But what about the card itself?

Given the timing of the card, it can obviously be a complete loss of 1 resource and 1 card if no enemy appears. That is, unless you employ various scrying tricks, of which there are a few. The easiest to setup is playing one-handed with Henamarth Riversong, who should be a staple in any solo deck. But since I now play 99% of my games with 2 decks, I pass over this card. And not just for those reasons, but because given all the attack power you can muster these days, paring off 2 in one instance can't compare with +2 every turn.

Still, when I want to create a direct damage deck, this one is on the radar... but again, unless I'm willing to play one-handed and/or make scrying work, I pass it up. Regardless, I like the card for it's artwork, for honing in on a specific moment in Middle-Earth, and now, for me, the added bonus that I'll always think about my son's widening eyes when I showed it to him, giving him an inkling of the scope of Tolkien's reach.

In the right quest and with the right heroes, this card can be a game-winner. Goes well with Thalin's ability, and even better with Denethor or any other scrying ability so that you know when to play it. It's also not too bad to play blind if a revealed enemy would undo your game. A no-brainer against quests with low enemies, but not bad for softening tougher enemies that aren't immune to player card effects. Keep in the mind the effect only works on enemies that are REVEALED from the encounter deck. Also doesn't work against quests that add enemies to the staging area from other decks not titled "encounter deck." (e.g. Underworld Deck from The Steward's Fear)