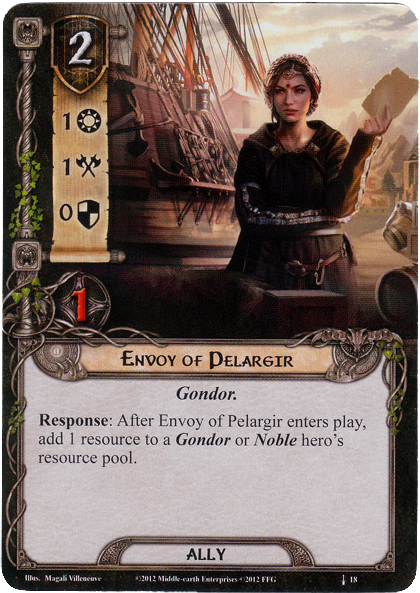 The Envoy of Pelargir looks rather humble and unassuming, but underneath that first impression lies a character who is quietly one of the best allies in the game.

To start with, let's look at her enters-play effect. In the current card pool, there are 75 non-fellowship, non-Baggins heroes. Of those 75, 33 are either noble or Gondor. If you were just picking heroes at random, the odds of building a three-hero deck without a valid target for the Envoy are just 17%. In practice, that percentage is going to be influenced by the fact that heroes are not chosen independently of each other. Selecting one non-noble dwarf hero greatly increases the odds that you'll also select a second and a third. On the other hand, "noble" and "gondor" are much more heavily-represented among the ranks of the top heroes. Caldara, Glóin, and Boromir are the lynchpins of the three most powerful deck archetypes in the current meta, and all are valid targets. Arwen Undómiel, Denethor, Glorfindel , Éowyn, and Galadriel are perhaps the most "splashable" heroes in the game, slotting easily into a huge array of different deck types; they're all valid targets, too. Add in Elrond and Mablung among the valid targets and perhaps the only top-tier heroes who AREN'T valid targets for the Envoy of Pelargir are Gandalf, Dain Ironfoot, Erestor, Háma, and Beravor.

This also ignores that one of the top-5 cards in the game, Steward of Gondor, also creates another valid target. But regardless of what the true percentages are, Envoy of Pelargir can slot into somewhere between 75% and 90% of existing decks with no change required to the starting hero lineup. And when she does, she effectively becomes a 1-cost ally-- you pay two to play her, but you get one back immediately.

It may not seem like it, but 1/1/0/1 is a phenomenal stat-line for a 1-cost ally. It's one of the best stat-to-cost ratios in the entire game, in fact. There are 180 allies in the card pool right now, and only 18 of them have a 1:1 cost-to-attack ratio. Of those 18, only seven can be played outside of Tactics: three ents (Quickbeam, Wandering Ent, and Treebeard), the doomed / 1-round Saruman, Henamarth Riversong, Ceorl... and the Envoy of Pelargir, who not only can be played outside of Tactics, she can be played in any deck of any sphere combination.

Of the 180 allies, 21 have a 1:1 cost-to-willpower ratio. Those 21 are overwhelmingly concentrated in Spirit and Lore (17 of the 21), with the only other options being: Dúnedain Hunter, Galadriel, Saruman... and the Envoy of Pelargir. That's a 1-willpower ally that pulls an enemy with him, a pair of allies that only last for a single round, and our humble Envoy.

Heck, even though she has literally no printed defensive capabilities, (0 defense, 1 HP, cannot survive a single defense), she's an effective 1-cost chump blocker. In the current card-pool that's less rare, but at the time of her release there were very, very few 1-cost chumps available. If you're playing through the game progression-style, then by the time you get to Heirs of Numenor the Envoy and Errand-rider will be just the 4th and 5th 1-cost chump blockers you get your hands on, after Henamarth, Snowbourn Scout, and Vassal of the Windlord, though more help on that front will be coming very shortly in the Against the Shadow cycle. And 1-cost chumps are crucial, especially given the lack of high-defense options early and the fact that they can pair with Horn of Gondor to be functionally free. Even today there are only eleven 1-cost characters capable of blocking, (sorry Erebor Record Keeper and Galadhrim Weaver), and the Silvan Refugee is an unreliable chump, anyway. Plus, again-- Envoy is Neutral and can fit in any deck.

So not only is she extremely resource-efficient as a quester, attacker, and defender, but for many spheres and decks she's the only resource-efficient ally available. Like I said, 1/1/0/1 is a fantastic stat-line for what is functionally 1-cost, and the fact that she's neutral just makes it that much better.

Beyond her crazy efficiency and universal utility, she has a couple other things going for her. She's Gondor, which is one of the more useful trait types for an ally. She benefits from Boromir and Visionary Leadership, she can be given the Outlands trait with Sword of Morthond, she benefits from Gondorian Discipline and For Gondor!, and during a Mutual Accord she can take advantage of all the global Rohan boosts, too. You won't get much mileage out of this unless you're already playing a Gondor deck, but if you are, this is a very nice icing. (Questing or attacking for 2 from a 1-cost ally with no downside is, needless to say, bananas.)

Also, her enters-play ability doesn't just reduce her cost by one in most decks. It's better than that: it serves as a type of resource smoothing. If you have a Spirit/Tactics/Lore deck, say, and you really want to play a 2-cost Lore ally in round one, you can spend your Spirit and Tactics resources to play Envoy, put the extra token on your Lore hero, and then play your Lore Ally.

If it's late in the game and one hero has stacked up a bunch of extra resources-- a very common occurrence in multi-sphere decks, especially ones that run Steward of Gondor-- you can effectively use Envoy of Pelargir as a 1-time Errand-rider, playing for one and transferring a second resource to a different hero. And like the errand-rider, the Envoy of Pelargir isn't strictly limited to moving resources to a hero you control. In multiplayer if one deck is resource strapped, a different player can use Envoy to help ease the pressure.

This is not a game-breaking ability like, say, Henamarth's scrying can be in single-player. But it's a useful ability, and it makes her better than if she'd just had a printed cost of 1 in the first place. And for a character that is already one of the best and most universal values in the game to also come with a useful ability, besides, really just puts her over the top.

She's not going to single-handedly win any quests for you. But even today, few allies are going to do as many little things to help you along for such little cost.