Response: Cancel up to 2 points of damage just dealt to a Gondor character.

At last, less than a mile from the City, a more ordered mass of men came into view, marching not running, still holding together. The Return of the King
Jake Murray 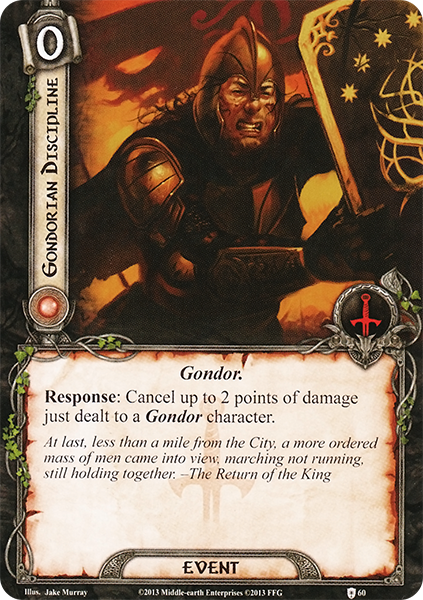 I picked this as one of my favourite player cards from the Against the Shadow cycle. To be honest, I don't know if that's totally accurate, but the point is I love damage cancellation, and this was the first full straight-up damage cancellation effect we got (Frodo Baggins cancels damage but he turns it into threat raise so there is still an ill effect you have to deal with).

"What's so great about damage cancellation?" You may ask. "Why not just take the damage and heal it afterwards?" Now it's true that healing tends to be more cost-effective than damage cancellation. But for one thing, healing effects only appear in the sphere, so damage cancellation is an alternative in . And perhaps more significantly, healing can't save a character who dies in one hit. If, say, Beregond takes two damage defending an attack there's no practical difference between cancelling the damage and healing it afterwards. But what if a big shadow effect means he takes 4 damage all in one go? Or if a shadow effect deals one damage to your Defender of Rammas? In either of those cases your healing effects would just be stuck sitting around and looking silly, but Gondorian Discipline or another damage cancellation effect will save your character's life (and in the latter case also save you from an undefended attack). It's perhaps better if you have access to both so you can save the damage cancellation for emergencies while healing is the normal order of the day. At least when your damage cancellation is a one-shot event as here. Honour Guards are another matter, but they're a decent way further into the card pool. Damage cancellation can save you from otherwise devastating direct damage as well as combat damage. Going back to heroes and attacks, I like to take undefended attacks a fair amount, to gain the extra action to kill the enemy afterwards, but sometimes it's dicey since a bad shadow could give you a dead hero. But if you're packing some damage cancellation then you can feel a lot more secure in taking that undefended that you're not about to have to scoop as a result.

So that's my case in favour of damage cancellation. Gondorian Discipline specifically is a pretty good example of it. Doesn't cost you anything besides the slot in the deck, and 2 damage is a good number. It'll save a chump-blocker from a Wolves from Mordor shadow effect in Massing at Osgiliath, for example, and many other things besides. Only works on Gondor characters, but that accounts for some good defenders and some good chumps (who you want killed by the attack, not killed by the shadow leaving you with an undefended attack). All in all this is a good card to have on hand when you get into one of those risky situations, and is notable because even now damage cancellation isn't that common an effect. A simple and unobtrusive card, but one which you should not underestimate.