Action: Exhaust Master of Lore to name a card type. Lower the cost for you to play the next card of that type by 1 until the end of the phase (to a minimum of 1).

"If Cirith Ungol is named, old men and masters of lore will blanch and fall silent." Faramir, The Two Towers
Ilich Henriquez 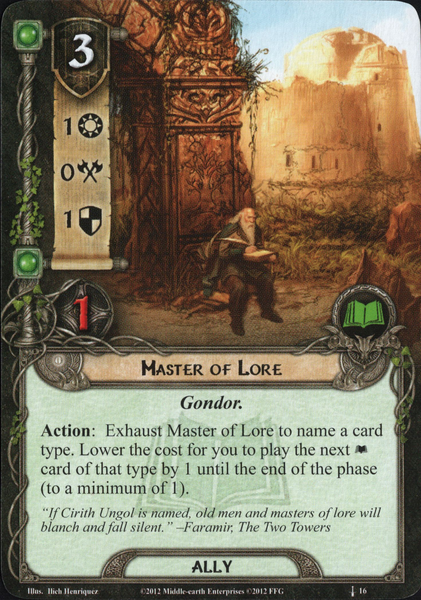 The Master of Lore, aside from being a great blog, is one of the cards in the game that has suffered a terrible fate. I think that Pippin and Power in the Earth are the only other two cards in the game that have been so terribly maligned. Unlike the previous two, however, Master of Lore's lack of popularity is due to his errata, which stopped a game-breaking combo but ruined the card nearly beyond repair. See, this is basically his fate over time:

Upon Release: "Yay, Lore has natural resource generation! I'll try him out!"

A Bit Later: "Oh, it's THAT card that's part of a broken combo. He's still usable but my opinion of him will be influenced as long as that combo's around."

FAQ 1.4's Release: "OH MY GOSH WHY IN THE NAME OF ALL THAT IS HOLY DID FFG ERRATA THIS CARD AND NOT BORN ALOFT? HE'S USELESS NOW AND I CAN NEVER USE HIM AGAIN!"

Now: "Meh, he's overcosted and takes three turns to pay for himself. Not worth it in my book."

So you can see how the combo, and the errata to the Master to stop it, ruined not only the usability of the card but also players' perceptions of it. Now, he is unused and unheeded.

But it need not be so. Allow me to make a case for him.

First of all, this is Lore's only form of unconditional resource acceleration and/or cost reduction. Gríma gives cost reduction, sure, but that comes at the cost of Doomed, which will steadily jack up your threat, and Damrod's cost reduction only works on Traps. So if you are running mono-, he can be an easy way to get additional resources so long as you make the initial investment of 3 resources. Also, he can combo with the above two heroes mentioned to get even more of a resource swing.

For instance, compare this card to Resourceful. If you're out of Secrecy, Resourceful essentially pays for itself in the first four turns and then starts becoming useful as a resource generator after that (same logic applies to Sword-thain). However, Master of Lore will pay for itself in three turns, not four, and it also has an advantage over Resourceful in that it can be cheated into play with, say, Elf-stone, or have its cost reduced by other Masters. While it does have only one hit point and is therefore susceptible to lots of treacheries, it has hopefully provided you with many resources at that point and can contentedly be sacrificed to the Necromancer when he begins reaching for the members of your fellowship.

If you want a deck showcasing his potential, look here: ringsdb.com (I know, I'm self-advertising, but the deck really does show the Master's potential!)

But at the end of the day, we sometimes must always be like Gandalf:

"Then in the name of the King, go and find some man of less lore and more wisdom who keeps some in his house!" At least it's something like that, I'm reciting it from memory, but basically Gandalf is yelling at the person trying to find Athelas for Aragorn and is only looking among loremasters and healers. But Gandalf always has the final word in all things. Even RingsDB card reviews.

emorlecallor 1120
He's also amazing during some quests, like The Druaden Forest. When having any resources at all is a liability, being able to store them in a Master of Lore is a great boon. Also, that quest doesn't have any treacheries that will ruin him! — jodudeit 24 9/1/16
You can also combine him with leather boots for some additional resource generation. — Mad Morderan 105 6/8/21