Action: Move any number of damage from one enemy to another.

That's cursed rebel-talk, and I'll stick you, if you don't shut it down, see? Orc Soldier, The Return of the King
Felicia Cano 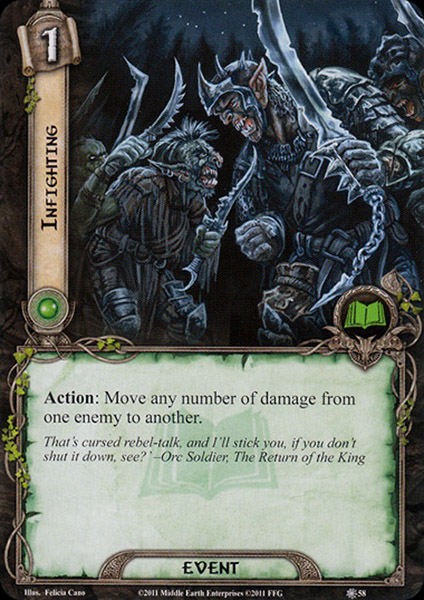 This is a rather niche card, but much better than a lot of people give it credit for. The significant issue with it is that it doesn't deal any additional damage itself, it only moves damage that is already there. Which means there needs to already be some spare damage lying around to be moved - which then raises the question of why you don't just kill the enemy that's already damaged instead of moving the damage to another enemy? The thing is there can be some decent reasons for that.

The classic one which I think a lot of people will consider is if the first enemy is stuck in a trap and thus not a threat to you. If you have an enemy in a Forest Snare then there's no real need for you to ever kill it, so you might as well stick a few damage on it when you have the actions to spare, thus setting up future use of Infighting. Or equally if you have an enemy stuck on Ranger Spikes and some means of attacking it in the staging area. Furthermore you could combo this up by placing some of that damage using Forest Patrol - just obviously being careful not to kill the trapped enemy since then you lose your damage sponge. Of course the problem with this is that it's only really effective if you manage to trap an enemy with a decent hit point pool, but which you can damage easily (Forest Patrol adds another card to the required combo while the efficacy of placing the damage by attacking depends on the enemy's ) and which doesn't have some negative effect for being in play/in the staging area/engaged with a player. And of course in the Ranger Spikes example it only works if you can attack in the staging area, in which case you often want to power up your to the point where you kill things in one hit, which doesn't work for this, and without scrying (which would be adding another layer of complexity) you can't target Ranger Spikes on a specific enemy. Forest Snares are easier, but they cost 3, which is a bit much if this is the only reason you're using them, when you could get some better combat power for less resources and just kill the enemy. Could be a nice combo with Dunedain though.

The thing is, I think a lot of people consider the potential in that combo, figure out how complicated and difficult it'd be - and consequently how inconsistent - and reject Infighting entirely as a result. Which isn't fair, because the card is not limited to that one potential setup. That's kind of an ideal situation, where you can have a tough enemy with 5 or 6 damage on it ready to be moved over to nuke another fairly tough enemy as soon as it comes off the encounter deck; but just because the ideal situation isn't going to come up reliably doesn't mean there aren't other, less ideal uses of the card which are still good. I would draw a simple comparison between this card and another 1-cost event, Feint. Now Feint is a staple of pretty much all decks ever, but let's compare the two. Feint prevents an enemy attacking. Infighting can prevent an enemy attacking and kill it for you as well. Clearly Infighting is the more powerful effect in that instance, with the proviso that it requires more setup to make it work that way. But if that setup is in place, it is simply a more powerful effect for the same cost. Hell, if you have enough damage to kill the enemy in the staging area it's effectively a Radagast's Cunning as well. And this doesn't necessarily require you to move lots of damage. If you move 1 damage and that kills an enemy before it attacks, then that's easily worth it.

As an addendum, one additional advantage of Infighting over just attacking and killing enemies yourself is that it potentially substitutes for Ranged - if an enemy is engaged with a deck that's not built for combat and you don't have much Ranged to kill it from across the table, Infighting could potentially make a sizeable difference by letting the combat deck attack one of its own engaged enemies and then have the damage moved over to kill the enemy in front of the questing deck. In general though, you probably want to be getting at least some of this damage from effects other than simply attacking, so we ask what effects?

Well, there are plenty of options: Thalin is one of the simplest and easiest since he'll put a damage on every enemy that gets revealed ensuring that there's plenty lying around. Of course it's still only 1 damage per enemy so unless you're dealing with some very weak enemies you'll probably want to supplement that with other effects. Argalad is another hero option, and one of which I am rather fond. Anborn is a good one, especially given the potential combo with Sword-thain+Wingfoot. Descendant of Thorondor is good though expensive for getting more concentrated damage out, and you could just Sneak Attack to dodge the cost. Of course you could also Sneak Attack Gandalf to the same end. Skyward Volley is a great option in this regard as well with the option to spread your instances of 2 damage around as you like. Gondorian Spearman and Spear of the Citadel are classics in this area for good reason. Finally, I mentioned traps further up, and if you're going for a Ranger/Trap thing, then Ranger Bow and more notably Poisoned Stakes could work excellently to provide you with quite a bit of damage which you can then shift around the place. If you're fortunate enough to get Poisoned Stakes on a high hit point enemy, you could potentially play Infighting over and over again to have that one poisoned enemy end up killing all the others. To be clear, you don't by any means need all of these options for Infighting to be good, but grab a few of them and you should have some pretty good options available.

In the end, I admit, a case could certainly be made that Infighting isn't exactly an optimal choice. But if we all played optimally all the time, we'd be using the same three or four decks forever. What Infighting is, however, is a fun and different way of dealing with enemies if you're willing to put some effort into preparing it. It doesn't work in a vacuum, but if you're willing to put some effort into the shenanigans then they can be rather effective as well as very fun.