Each Outlands character you control gets +1 .

We heard of the horns in the hills ringing,
the swords shining in the South-kingdom.
The Return of the King
Adam Schumpert 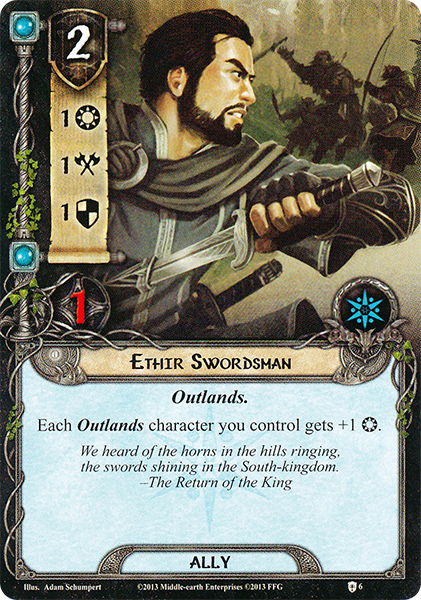 Similar to Knights of the Swan, this card is straight forward to use - the more of them in play, the better your combined . However, this is a 2 cost card, so the benefit to cost ratios are a little different than Knights of the Swan and Anfalas Herdsman.

Let's look at the multiplicative impact of this card and its passive bonus, passive bonuses being the best types of bonuses in games.

The first Ethir Swordsman you play on the table gives 2 for 2 cost. This is a 1:1 stat to cost ratio, already better than the average 0.57 stat to cost "average ratio" of the 56 ally cards released as of Cycle 9, AP 1 (Wrath and Ruin).

If you can get the third and final Ethir Swordsman on the table, it adds +6 for 2 cost, bringing three Ethir Swordsman to 12 (3 x 4 each). This is a 3:1 stat to cost ratio. One of the best cost investment values for in game.

And this doesn't count the bonus added to the usual Outlands ally swarm that accompanies this archetype, Anfalas Herdsman, Knights of the Swan, Warrior of Lossarnach, and Forlong!

How does Ethir Swordsman stack up against Core set staple Faramir? Faramir adds a +1 bonus for all characters, including heroes.

The downside is Faramir has to exhaust to use his power, which means his 2 will usually not contribute to questing. So 4 cost initially gives you typical +3 (+1 for each hero, if no other allies in play), a better than average 0.75 to cost ratio (especially in Leadership sphere), but not as good as a single Ethir Swordsman in terms of return on investment.

However, having another ally on table (5 characters total, including Faramir, brings Faramir's stat to cost ratio back to the 1:1 of Ethir Swordsman.

And Faramir can double his bonus if he can be readied, such as with Ever Vigilant. I think Faramir is a better pure boosting play.

However, Ethir Swordsman is still a great value, and if you really want the you can still use it with Faramir - and it would still be thematic!