Action: Discard a card from your hand to heal 1 damage on any character. (Limit twice per round).

"You are in Rivendell, and you need not worry about anything for the present."
Gandalf, The Fellowship of the Ring
Aleksander Karez

Flight of the Stormcaller #8. Lore. 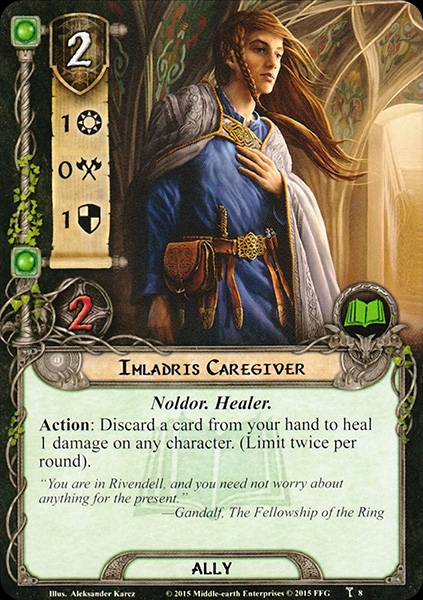 It's been awhile since I've done a card review and I wanted to advantage of that fact and cover what has felt like a pretty solid alternative to Warden of Healing. Ah yes, the almighty Warden. His ability to spread his healing to multiple characters with a simple exhaustion, a built-in readying effect, and his synergy with Elrond have put the Healer on a pedestal for pretty much his entire time in the card pool. Since then we have received other worthwhile healers/healing effects with the Silvan Tracker, Wellinghall Preserver, and the Galadhrim Healer. Admittedly, with the Galadhrim Healer I thought we were really close to having a contender. The issue with the healer is that it is best used in a Silvan deck, not necessarily because of any trait interaction, but for that deck having the ability to take full advantage of the ally's ability. Being able to heal 3 heroes on any 1 player is excellent, ESPECIALLY with Elrond involved. Still not enough to knock the Warden down a peg.

Back to the Caregiver. For two resources you get an ally that can almost do the same thing (except it requires two discards vs. an exhaustion). The caregiver, however, can quest every round, and has an extra hitpoint. That extra hitpoint particularly stands out to me in the more recent quests I've played. I've seen many a Warden come into play only to be wiped out in the next turn or two due to it's 1 hitpoint. The caregiver at least is bought an extra turn of survival and, worst case scenario, can heal itself if you're so inclined.

The biggest ding against the Caregiver is of course the consistent taxation on your hand that's required. And I'll admit, the Caregiver is not a 100% replacement to the Warden, but it's pretty darn close. What keeps the Caregiver in high regards to me is that it is less deck specific than something like the Galadhrim Healer. Being in a Noldor deck obviously puts the Caregiver into Warden levels of excellence but without Noldor it still operates just fine. In fact, just including a card like Elven-light makes the Caregiver a no-brainer. Chuck a card for healing and then pay a resource to draw a card. People are quick to point out that the new Arwen Undómiel turns cards into resources and, with Elven-light, resources into cards. With the Caregiver, cards become healing points and resources become the cards needed for that healing (with the added caveat that you still get to draw a card!).

SecondhandTook 533
He can in fact become a card draw solution if you don't have any other means with Elven Light. — Lecitadin 184 8/18/16
I was going to review this guy but you beat me to it! :) — MDuckworth83 3127 8/21/16
I was going to review this guy but you beat me to it! :) I'll even up you and see that I think that this card is &quot;better&quot; than the Warden of Healing. Not only the questing and extra hit point, but he is also handy to keep around as a chump blocker. What is more, his healing is less restrictive than the Warden. You can heal 2 hp on 1 character or 1 hit point on 2 characters, while the Warden only allows the latter. He's pretty much completely replaced the Warden for me in all decks except for Gondor traited ones. — MDuckworth83 3127 8/21/16
@mduckworth83 great points! I do like that you can just heal 2 on 1 character OR do the warden thing and heal 1 on 2 characters. Certainly more flexibility. Sorry I beat you to it! Feel free to write a review anyway! Great for newcomers to see as many opinions as possible :) — SecondhandTook 533 8/24/16
Insanely good in a deck that runs Elrond and Galdor of the Havens heroes and includes cards like Elven Light, Glorfindel ally etc. You can easily consistently heal every turn and also draw cards from doing so via Elven Light. — Psychorocka 461 9/3/16
1

I would say this is not the strongest hero in the game, Ioreth can be very powerful, and Warden of Arnor can heal one damage from two different characters per round, this healer card definitely has place in some decks. I can see this being a really good option in decks with heroes like Erestor or Arwen Undómiel. With Erestor you are likely to have a card or two spare so his healing ability makes use of them, instead of just discarding them without any use. With Arwen Undómiel you may still discard the Elven-light into discard pile for resource, pull it back and if needed, chunk it back in for healing. Also he can be good in decks which have lot of unique cards you dont need and they may sit in your hand. This way you can get some healings out of them. As the other reviewer pointed out, this healer can also survive treacheries, which deal damage to allies, because he has 2 hitpoints, unlike Ioreth or Warden of Healing. And he can quest at the same time. Also if he dies and you play the ALeP cards Wandering Spirit he can be put back into play from your discard pile! Which can be put into the discard for the healing effect as well! Another good ALeP card I would include if I have access to Tactics would be Relic of Nargothrond as you can discard it for his abilty and then play it from the discard pile! I fully admit I really like this healer and if I can, include it in my decks.