Attach to a location.

Action: Exhaust a Ranger or Scout character to give attached location -2 until the end of the phase.

"In this high play you may see the two powers that are opposed to one another; and ever they strive now in thought..."
The Fellowship of the Ring
Leanna Teneycke 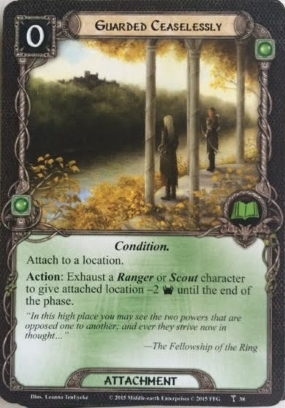 Guarded Ceaselessly is a surprisingly good card, though it does have several flaws that prevent it from becoming great. The greatest flaw it has is its timing; without the likes of Dunedain Pathfinder to bring out locations during the planning phase, you're going to need to reveal a location, leave it in the staging area for a round, then play Guarded Ceaselessly on it during the next planning phase. In addition, unless you have Ranger or Scout heroes who you're willing to exhaust, Guarded Ceaselessly does nothing on its own, requiring you to draw into additional cards in order to make use of it.

However, while this slightly-clunky timing and requirement of drawing into multiple cards may hinder Guarded Ceaselessly, they don't render it useless. They do make it a bit harder to use effectively, but it is still possible to do so.

First order of business when it comes to Guarded Ceaselessly; don't play it on a location it is imperative that you explore, like Siege Tower from Battle of Pelennor (Pellenor? Pelenor?) Fields. Rhovanion Outrider, Mirkwood Explorer, and other forms of location control are better suited for dealing with locations like that. In a similar vein, don't play Guarded Ceaselessly on a location you anticipate traveling to. Ideally, you want to play Guarded Ceaselessly on a location with moderate to high , preferably at least 2, that either has a bad 'when explored' effect (i.e.; Sinister Dungeon from The Dread Realm) a bad 'while active' effect (i.e.; Gladden Fields from the Core Set), or a bad When Revealed effect (i.e.; Fouled Well from Khazad-Dum). Fouled Well is actually one of the best targets for Guarded Ceaselessly; it has 3 so you'll definitely be able to get off at least one full-strength use of Guarded Ceaselessly's action, it has 5 quest points so either exploring or location controlling it is going to take a while, and it has an annoying When Revealed effect that you would like to see never come up again.

Second order of business when it comes to Guarded Ceaselessly; don't trigger it before the staging step. One of the best things about Guarded Ceaselessly is that, as a raw action, you can trigger it at any point during the quest phase, allowing you to keep your characters ready until you see if you actually need the pseudo 2 they provide by triggering Guarded Ceaselessly. If you don't, you can keep them ready, and if you do, they managed to avoid anything that targets either exhausted characters (not hitting my 1 "questing" allies this time, Necromancer's Reach!) or questing characters (combo; exhausting characters to trigger Guarded Ceaselessly as opposed to committing them to the quest gets around Brambles and Thorns. Nonbo; that means you left a location in the staging area in Nightmare Mode Emyn Muil). In addition, regardless of who you exhaust for Guarded Ceaselessly, the attached location gets -2 , meaning that you can effectively turn Snowbourn Scout into a 2 ally if you don't need a chump.

Third order of business when it comes to Guarded Ceaselessly; don't expect it to replace Northern Tracker. Northern Tracker is meant to hard-counter location lock by removing multiple locations from the board at the same time; Guarded Ceaselessly soft-counters location lock by allowing you to mitigate the impact one specific location has on your questing. Guarded Ceaselessly's a knife, Northern Tracker a sledgehammer. A knife will never replace a sledgehammer's ability to pulverize, and you can defeat an enemy as easily with a sledgehammer as you can with a knife, but there are some times where you need precision over sheer, brute force, where you don't want to open a door by smashing it open but by carefully prizing open the lock. Northern Tracker represents fairly well strength of arms in the Lord of the Rings, able to beat back your foes for a time but not for all time. Guarded Ceaselessly more represents the resolve of the Free Peoples in Middle-Earth, not able to influence events everywhere but, within their own little patch of land, able to do much more against the Shadow than all the hosts of Men.