Temple of the Deceived #62. Spirit. 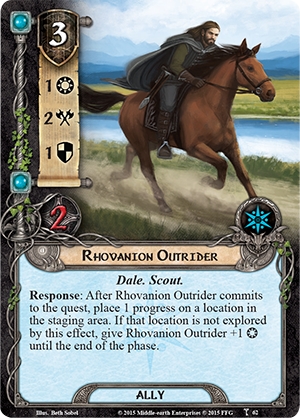 Bold statement time: Rhovanion Outrider > Northern Tracker. I will die on this hill.

Second, in exchange for the cheaper cost, you only get slightly reduced stats relative to the Tracker, -1 and -1 (which can be a problem, admittedly). This does make the Outrider's statline a little weaker, but it preserves the 2 that is so useful for while shaving a resource off the cost. However, all of this is ignoring the Outrider's textbox, a fatal mistake.

Rhovanion Outrider's textbox is fairly simple; after committing it to the quest, place 1 progress on a location in the staging area. This is clearly a weaker Northern Tracker the majority of the time (though there are some exceptions to this), but there's an additional part that makes the Outrider more interesting; if that doesn't explore a location, the Outrider gets +1 . This is where the Outrider really begins to show its quality vs. the Tracker; it's an ability that triggers upon committing to a quest that, for once, isn't on a character with only 1 . At worst, assuming there's a location in the staging area that you can place progress on, the Outrider is a 2 ally with 2 , which isn't good for 3 resources but isn't the worst. Yes, the Outrider does only have 1 if it does explore a location with its Response, but the majority of locations that you'll want to explore have more than 1 ; by exploring them, you effectively replace the +1 boost with +X , where X is the of the location you explored -1 (the Outrider's starting ).

Great, you say. But why don't I just use Northern Tracker for all that? It functions almost exactly the same, reseting the encounter deck's board state with regard to locations every few turns. Is spending 3 for a laser better than spending 4 for a nuke? The majority of the time, I'd say yes, partially because saving money allows you to spend it on other useful things (and has a lot of them), and because of an assumption made in one of my earlier statements; if the majority of locations that you want to explore have more than 1 , it must then follow that there are some locations you don't want to explore. And there are, typically low-, high-quest point ones. The Core Set has a great example in the form of Endless Caverns. With Surge, Doomed, and only 1 , Endless Caverns is much better to see in the staging area than shuffled back into the encounter deck. With the Outrider's surgical strike capabilities, you can avoid that; zap any threatening locations with the Outrider, leave the Caverns in the staging area until the end of time. Northern Tracker doesn't have this; it's a tidal wave, sweeping over good and bad alike. It can get rid of Tower Gate and The Necromancer's Pass, yes, but it will also put Endless Caverns in the discard pile to be shuffled back into the encounter deck and make your life miserable again. Or, for a more extreme example, look at Nightmare Mode Journey Along the Anduin; to be precise, look at Gladden Marshlands and A Flooded Ford. Gladden Marshlands would really, really appreciate location control to help whittle it down. But what if A Flooded Ford comes up shortly afterwards, followed by the East Bight so you can't travel to the Marshlands to get rid of them? The Outrider would be able to target the Marshlands with laser-like precision, while Northern Tracker would, unless you have 6 of them out at once, pretty much doom the players to threating out.

Rhovanion Outrider is a more specialized Northern Tracker, slimming down on potentially unneeded stats and ability targets in exchanged for higher and lower cost. And as the economist in me is happy to notice, in this case, 9 times out of 10 specialization wins.

AlasForCeleborn 525
Nice review, I would only add that sometimes in multiplayer where locations gathering in the staging area the Northern Trackers are still the better card since they might end up placing many more progress tokens each round gettin the group out of some bad situations the Outriders would not be able to. Still they are a very good card. — Alonewolf87 1655 12/3/20
4

A great alternative to Northern Tracker, I might even say slightly better in solo/2 player games. In a solo game, you'll have about 2 locations on average in the staging area (any more and you're in a lot of trouble). So the Outrider starts to give you a return of 3 willpower equivalent per turn, while Northern Tracker does about the same but a turn later. Another advantage over his dunedain counterpart is you will get rid of a location in the staging area a turn earlier. Combos well with Scouting Party.

With the Wilds of Rhovanion just around the corner, th Dale trait will likely see some love, making this guy even better.