While the top card of your discard pile is an event, Sailor of Lune gets +1 and gains: "Cannot be damaged while committed to the quest."

"They are sailing, sailing, sailing over the Sea, they are going into the West and leaving us," said Sam, half chanting the words, shaking his head sadly and solemnly.
The Fellowship of the Ring
Owen William Weber 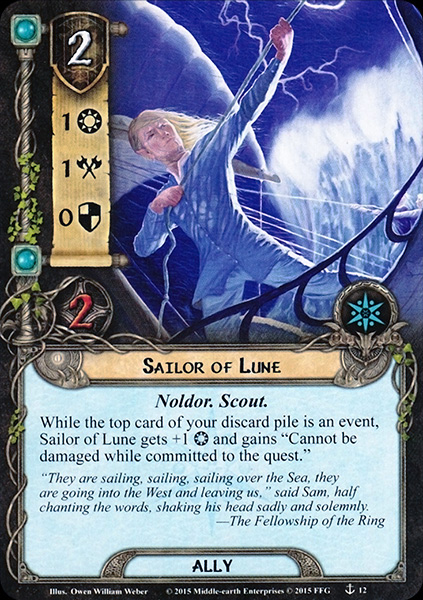 This is one of those cards which initially looks poor, but is subtle and better than you think. 2 cost for 1 is pretty poor in , and its other stats aren't anything to write home about. However, it's the ability where this card shines, given the right situation.

Firstly, activating the ability is not too hard in a deck, given cards like Elven-light are staples, and you can use them to feed the abilities of Arwen Undómiel or Éowyn.

Once you have the ability activated, there are two situations which make the sailor a good choice. The first, common case are the many when revealed effects which damage characters who are exhausted or committed to the quest. The sailor just laughs these off. The second (and more awesome) case is when you can use a readying effect to have the sailor defend against an enemy that attacks during the quest phase. These are more common than you might think, and can really throw a wrench in your planning. The sailor helps with these situations and means you don't lose an ally in the process. Honestly, there are few things more hilarious than a puny elf shrugging off an attack from the Balrog without getting a scratch.

These things are situational, of course. There will be plenty of times where an Ethir Swordsman is going to be a better deal, but in those times when the sailor's ability comes off, he's well worth it.