"I have crossed many mountains and many rivers, and trodden many plains, even into the far countries of Rhûn and Harad where the stars are strange..."
Aragorn, The Fellowship of the Ring
John Stanko 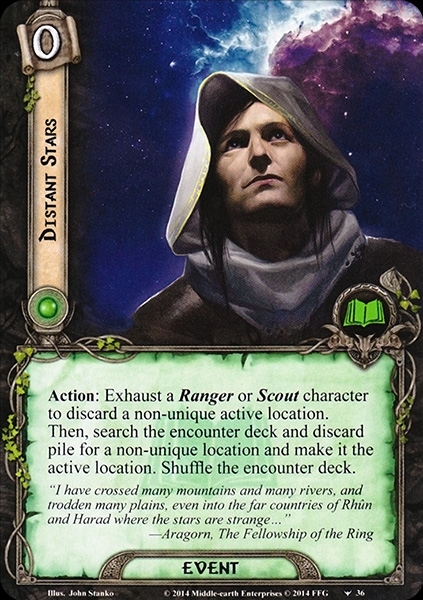 It's been awhile since I've written a review, largely due to a newborn in the house and a new job seriously cutting into LOTR:LCG playing time, so I haven't had a lot of time to experiment with new decks and new cards that have been coming out. However, Distant Stars falls right into my favorite category of cards...those which are not obviously powerful up front, but can be very potent once you figure out how to use them. This combined with my love of all things and all things ranger has inspired me to come out of hibernation for a card review.

The first thing that gets my attention about this card is that it seems to represent a subtle but growing Ranger/Scout theme in the game... that is cards that allow a Ranger or Scout character to exchange an action for an effect. Interestingly, Rangers have always tended to be characters with evenly balanced stats across the board as well as "exhaust to" effects (Beravor being the prime example) which already make them ideal targets for action advantage in order to realize their full potential. Now we have cards like Distant Stars and Quick Ears popping up that seem to be building on this theme.

Of course this leads into the obvious downside of this card and cards like it, and the reason why it probably isn't instantly embraced as a power card. It demands an exhaustible action from a hero or ally in a game where hero/ally exhaustible actions are already a scarce resource, and action advantage is king. Even though the cost is 0, the cost of an action is not insignificant, coupled with the restriction to Ranger and Scout characters. Obviously, this is not one of those general cards that can be effective in every deck.

For that reason, I was not initially that excited about this card... until I threw it into some decks and realized that it can actually be a very effective form of indirect location control, in some scenarios even more so than others. What it essentially allows you to do is automatically discard a non-unique active location that you don't like. These would be locations that either have a nasty active location effect, a high amount of quest points to get through, or as is often the case both at the same time.

But wait a minute, we have to read the rest of the card. Since the card says that we have to replace it with another location, isn't it kind of a wash? How much did we really gain if we just remove one active location for another? Well firstly, you'll almost always want to replace a high quest point location with a much lower quest point location, which basically equates to a net gain of x progress, x being the difference between the former and latter location quest points. If you exchange a 6 quest point location for a 2 quest point location, you basically got the equivalent of "4 willpower boost" for 0 cost and a character exhaust. But secondly, the potentially more powerful benefit is that it allows you to go through the entire encounter deck and find those locations that either 1.) have high staging threat, 2.) a nasty "when revealed" effect, 3.) A nasty staging effect, or 4.) a nasty travel effect... and completely bypass ALL of that by making it an instant active location! In other words, it allows you to go through the encounter deck and remove those locations you really don't want to see come off the top of it during staging, and use this location to replace an active location that you really don't like to see as the active.

In summation, the best power play for this card is to use it to discard an active location with high quest points and a negative active location effect, and replace it with a low quest point card of your choice from the encounter deck that has high staging threat, a when revealed effect, or travelling effect that you want to bypass. In the right scenarios, this card can actually be a "more" effective form of location control than Asfaloth by allowing you to avoid nasty location effects of all types and help clear actives that might stick around for more than a round or two. This card can be so good in most scenarios, that it has pretty much become a staple for me in any deck I make that has both Lore sphere and Rangers (which accounts for the majority of my decks!)

All of this makes this card easily worth a Ranger action in most situations, especially when anybody who is running decks heavy on Rangers should usually be using some form of action advantage anyway!

Distant Stars is one of those cards for which the use isn't immediately obvious so it often gets left out of decks. On giving it some more thought though, one can quickly realise that it enables a wide range of useful shenanigans.

So, break down. Costs no resources which is good, but requires you to exhaust a Ranger or Scout character. This isn't too much of a hardship since there are plenty of Rangers and Scouts but you may want to plan around this when selecting allies for your deck. The biggest non-candidates for this exhaust would be characters who normally quest - on the other hand any character who generally is used for combat or utility purposes (or both) can often give up their action for this instead with no real issues. For example, Ithilien Tracker, Snowbourn Scout, or even a solid hero option in Argalad are all great choices.

Next we turn to the ability. You discard the active location and replace it with one of your choice from the encounter deck. Only works for non-unique locations to avoid potentially breaking the intended mechanics of certain quests, but this is an incredibly powerful location control effect in both parts of it. You can use this to get rid of a horrible location without needing to explore it and/or to fish out a location you particularly want to see. Avoiding negative effects triggered on exploring or placing progress on locations by just discarding them instead is a useful option to have, or equally avoiding negative effects for having that location active/in play; on the other hand any locations with positive effects while active or for exploring them will often be balanced out by a negative Travel cost, which this bypasses. Note also that the replacement location can potentially be one which is immune to player card effects if you wish, since that immunity is part of the game text, which is not active while the location is not in play. So all that sounds pretty good, and that's just considering the card in isolation against a hypothetical generic quest.

The next step is to consider what can happen if we combine it with other player cards. Untroubled by Darkness, Cloak of Lórien and Rossiel can all give you reasons to potentially care about the traits of the active location, over which you have perfect control using this card - though this isn't an option I'd necessarily bother with personally. More recently though, Ghân-buri-Ghân loves this card - since his is equal to the of the active location, this card can let you manipulate his as you like, and unlike the normal run of the game, you don't have to go through the step of having that high location in the staging area counting against you before you get the boost - bonus points if the high threat location also has less quest points than the one you discarded. But the extreme cases came in Race Across Harad, in the form of Explore Secret Ways and the Eryn Galen Settler. With Explore Secret Ways you can negate large amounts of in the staging area (and thus make a nice quest push) if you find yourself looking at multiple copies of the same location, while with the Eryn Galen Settler if you see a location you really don't like you can use Distant Stars, pull a second copy out of the deck, explore it and discard the other with the Settler, thus meaning that you not only removed that location the same Quest phase it was revealed, but you also removed a second copy of it from the encounter deck, ensuring that you're that much less likely to see it again until the deck is reshuffled.

And finally we can consider examples of shenanigans for specific quests. In Journey to Rhosgobel you could pull out Forest Groves and therefore Athelas; In We Must Away you can always find a Troll Camp when you need to remove Sacks; In Into Ithilien you can bypass the Ithilien Road at the start of the game; In Escape from Mount Gram (where this card was released) you can discard an active location to immediately rescue all the cards under it and replace it with a new one with new cards to be rescued; Helm's Deep and Journey to the Crossroads both have locations with positive effects while active which it could be helpful to manipulate, but even better perhaps is using Distant Stars for Siege of Gondor, where you can swap in a Ship location just in time to explore it, thus advancing towards the end of the quest without suffering any of the ill effects for having a Ship location active; and my favourite, the Discover keyword in Ruins of Belegost is triggered when a location becomes active, so Distant Stars can allow you to trigger it multiple times in the same round, meaning potentially multiple Hazards but also multiple bits of Loot (and when you discard the location guarding the Loot you immediately claim it of course).

All in all, Distant Stars may not be a card for every deck and perhaps not for every quest. But if you have a location control focus and/or you're playing a quest which will reward you for pulling shenanigans with the locations then this card can be a veritable goldmine of possibilities for a player willing to give it some thought.