If the active location shares a Trait with a location in the victory display, Rossiel gets +2 .

If the attacking enemy shares a Trait with an enemy in the victory display, Rossiel gets +2 .

"Did you not say that you wished to see Elf-magic?"
Galadriel, The Fellowship of the Ring
Alexandre Dainche 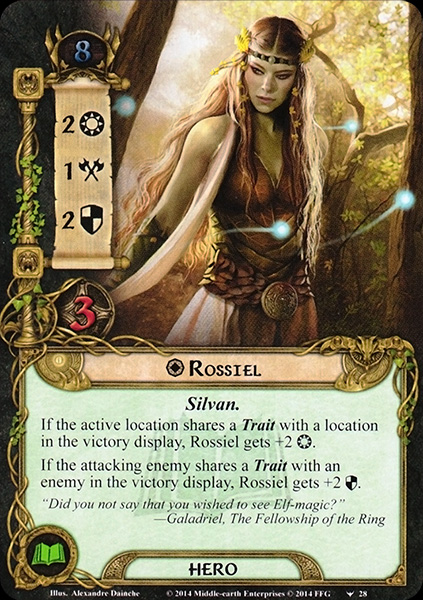 Rossiel is one of my favorite characters. Her ability is so unique, plus my favorite sphere, and she gets super powerful around mid-game, to downright stupid at end game. Combine her with Out of the Wild to make her stronger quickly, and of course all the other victory display cards have the chance to beef her up even more. She combines nicely also with Cloak of Lórien, Ent Draught, and/or Elven Mail (in multiplay) to make her a top-notch defender. Having a possible 4 is darn handy too. She mainly needs help with attacking, so I like to pair her with Ent heroes or with Haldir of Lórien, but many combos are possible.

The great and powerful Seastan observes that Rossiel is somewhat inconsistent in terms of which scenario you are playing, pointing out that in some scenarios where there are only a few traits among enemies and locations, she is better than in scenarios where there are a variety of traits. Having a variety of traits means she wont always get her stat buff as consistently. This is of course true, however, with great respect, I'd like to offer one additional observation. I don't think this is as much of a drawback as you initially might think, and this is because normally you can only either quest or defend, but not both. If the traits are more varied, then it's easy enough to shift gears and have (say) Rossiel quest while another hero defends this turn, then switch on the next turn, basing your decision on which traits are in the victory display. With a small number of traits, Rossiel gets the bonus either way, but since she can't do both at the same time, it's not as big of an advantage. Naturally you can mitigate this with Unexpected Courage or some such, in which case she because super-strong. But most of my decks don't have much in the way of readying (but they have other virtues...), and so consistency isn't as much of a problem for my decks with Rossiel.

Mad Morderan 109
If I am using her for questing, why not use Tactics Eowyn? If I want a defender, why not use Spirit Beregond? In my mind, Rossiel only works in fun secrecy readying decks — NERD 104 6/13/22
The answer here is because she can do either, rather than be restricted to one, and with readying could do both every round. Especially for a threat of 8, that's a steal. It's hard to pull off which is where the balance comes in. But she's definitely one that benefits from higher player counts where you have more opportunities to play the enabler cards earlier - Out of the Wild, Leave no Trace, Scout Ahead etc - and more readying. — Mythik 118 6/14/22