Out of the Wild

Event. Cost: 3.
This card was errata'd 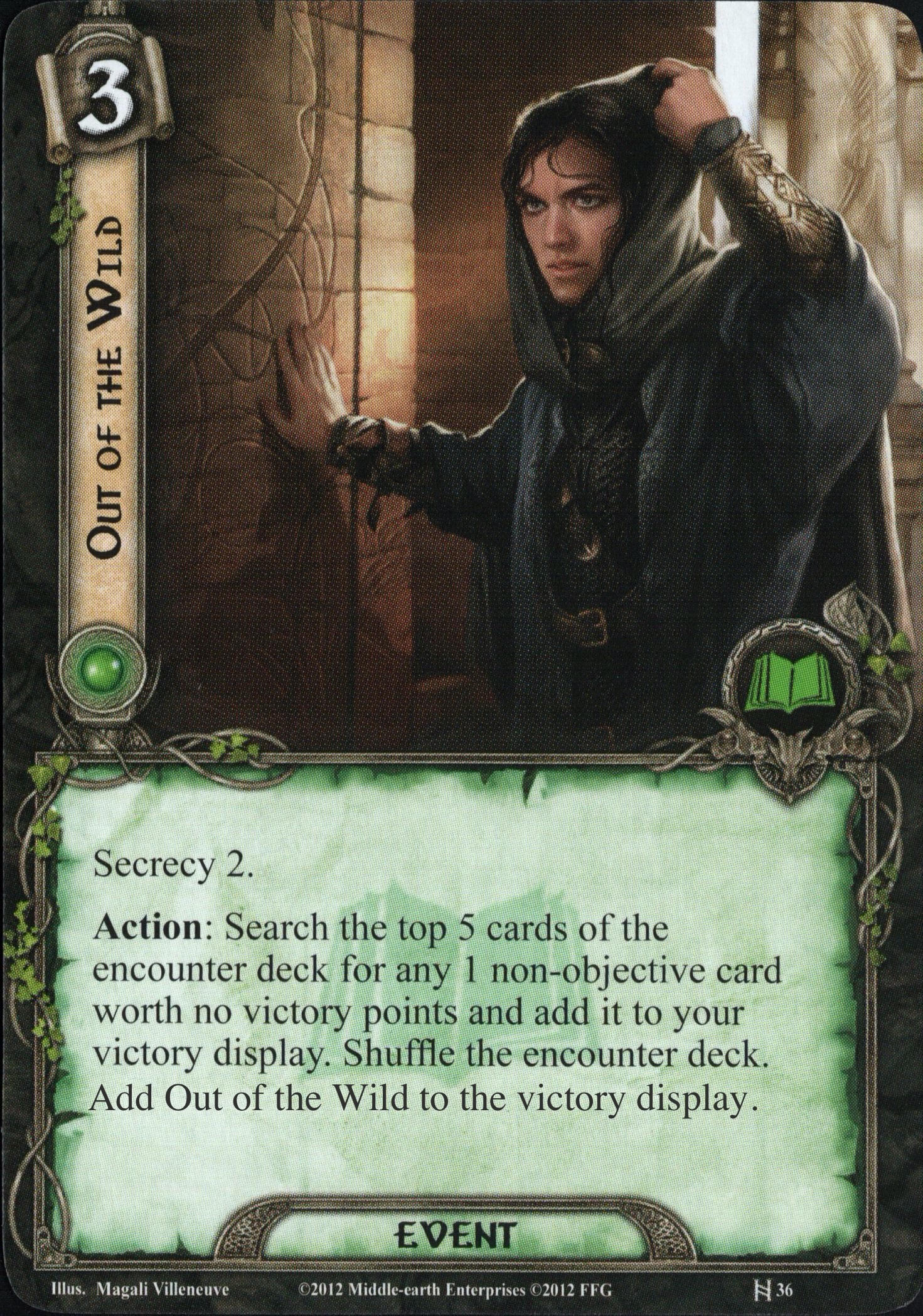 Out of the Wild is one of my favourite cards in the game. Encounter deck manipulation is a complicated and difficult strategy to pull off, but when you do it's incredibly satisfying to by your own agency carve out a clearer and safer path through the quest than you might have otherwise had. This card also formed the basis for the whole victory display strategy later expanded on in the Angmar Awakened cycle.

The two later victory display events, Leave No Trace and None Return work differently in that they only target locations and enemies which you've already dealt with. As such, the benefits are more limited - it sets up Rossiel, Keen as Lances and The Door is Closed!, but that's diving deep into that playstyle, whereas as a splash they do much less, since for that specific card, adding it to the victory display will only make a difference once the encounter deck is reshuffled, making it rather dependent on player-count or particular quest mechanics how relevant it is. Out of the Wild on the other hand is a pre-emptive measure, allowing you to remove from the encounter deck a card which you haven't seen yet. Of course since you just look at the top 5 and the deck is randomly shuffled, there's no guarantee of you seeing any particular card you might want to remove, but chances are pretty good that you'll see something which is worse than average for the quest. And whatever card you remove, that's a card you definitely won't be revealing or having as a shadow effect later on, making the encounter deck that bit safer for the rest of the quest even if this is the only victory display stuff you're using. The impact is of course magnified if the deck is reshuffled more or if you have other victory display effects - this and Scout Ahead are the only means by which you can add a treachery card to the victory display, which can allow you to set up some excellent uses of The Door is Closed! There's nothing quite like being able to completely ignore a card like Sleeping Sentry all game.

(The next paragraph is no longer accurate as of FAQ 1.9) It would be remiss of me not to point out that unlike Leave no Trace and None Return, Out of the Wild does not add itself to the victory display. This makes it less effective for reducing the cost of Keen as Lances, but means that it can be recycled by effects like Scroll of Isildur, Will of the West, Galadhrim Weaver or The White Council to let you put more cards in the victory display. At the extreme end, Seastan has famously used this to move the entire encounter deck into the victory display and thus render a quest trivial. That's obviously an outlandish example which I don't suggest you emulate as it's kind of a boring way to play the game, but the ability to recycle the event can be used in moderation in more normal decks.

I brought up the problem of not being able to target a specific card, but that's not 100% true. For one thing, you have the option of potentially using scrying effects like Henamarth Riversong, Denethor, Rumour from the Earth, Risk Some Light, Palantir, Interrogation, etc to find out when a horrible card is coming and then use Out of the Wild to add it to the victory display. Since you then shuffle the encounter deck you lose the benefit of having scried multiple cards (if you did), but that loss of information may not be an unreasonable price to pay for the security you gain by removing the card you saw from the encounter deck. At a more extreme end, if there's a specific card you want out of the encounter deck even if it has already been revealed and explored/destroyed/discarded or been discarded as a shadow card, you could actually use Shadow of the Past to return that card to the top of the encounter deck and then use Out of the Wild to add it to the victory display. That's quite a bit of effort and expense to go to for one card, but it may be considered a valid possibility in some circumstances - for example at higher player counts the encounter deck may be reshuffled multiple times in the course of a game so if there's one really nasty card you may be willing to go to great lengths to ensure you never see it (again). A Knife in the Dark adds all Nazgul enemies from the encounter deck and discard pile to the staging area at stage 3, so getting them into the victory display instead reduces your combat load at the end of the quest. And if you're playing Flight to the Ford in campaign mode you could possibly use this combo to put a Burden into the victory display, thus preventing it being added to the campaign pool.

On the subject of expense, the one thing I haven't addressed about this card is its cost and Secrecy keyword. The Dwarrowdelf era Secrecy cards had issues with how they were costed in general, but this is one which never really bothered me. In Secrecy it only costs 1, which is a fantastic deal. If I build a Secrecy deck with access, this card goes in by default. Out of Secrecy it costs 3 - this is more difficult to stomach especially since can be a somewhat resource-starved sphere, but I still think it's sufficiently worth it if you build a deck using an encounter deck manipulation strategy and able to afford the cost (through e.g. Gríma, Master of Lore, Good Meal, Steward of Gondor, Gandalf's Staff etc). Obviously that limits the use of the card to only certain decks, but the same could be said of many cards, and that doesn't make them any less good or less worth it when used in those specific contexts. 3 may be a steep cost, but the ability to remove a card from the encounter deck for the rest of the game is an incredibly powerful one and merits such a cost to my mind.

I love this card with Rossiel. I don't care about secrecy. Even in Solo play it's worth it. If you're under 20 threat, great. But I use it with Rossiel in over 20 threat decks all the time. It is very much worth 3 resources to give her the buff that adding cards to the victory display gives her. 4 Will power? 4 Defense? Heck yeah! For only 3 resources you give her a permanent stat increase against most of the subsequent enemies or locations (depending on what you remove), and Keen As Lances becomes much cheaper, especially after the errata 1.9 which adds it to the victory display as well. Not only that, obviously you get to remove a card from play--the whole point of the card, after all--which can be game changing as Warden of Arnor so brilliantly explains in his review of the card. Get rid of that annoying enemy with surge, or that enemy that has a nasty "when revealed effect", a stupid crazy shadow effect, or a location with a crazy high threat. Very versatile card, plus the artwork is Magali V...always a treat. Absolutely required in any Rossiel deck.

Mad Morderan 114
This is a solid card, but it should be flagged as having been errata'd. — thereelaristotle 7 1/14/21